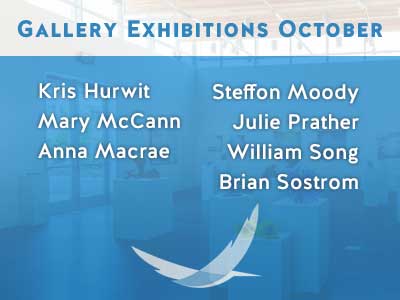 In the Koch Gallery is a collection of abstract artists inspired by landscape, nature and geological formations.

In Mary McCann’s show “Geology in the Abstract”, she explores the  outcomes of events in the geologic story of our planet. Ocean floors spread.  Tectonic plates move.  Continents collide. Subduction thrusts up great mountains.  Huge land masses slide past one another. Unimaginable heat and pressure squeeze rock and rearrange crystalline structure. Volcanos erupt. Ash and molten rock spew out to reform the landscape.  For Mary,  “Oddly enough I find this story comforting.  There is beauty in the new structure, beauty in the rock, beauty in the fact that we are on this ever changing Earth.  And we have no say in how She decides to keep on moving.”

Anna Macrae’s work  “Fractured Landscapes” is generated in response to the materials that she uses together with the techniques and processes that she has developed. She is interested in texture and surface and playing with nonprecious unconventional materials.  She continually challenges herself to explore new methods of working. She thrives  on harnessing the potential chaos of the unknown during the creative process of making abstraction paintings which reference urban and rural landscape.

Nature and the beauty of emptiness have heavily inspired Brian Sostrom’s paintings in his show “Rise to Fall”. The atmospheric images are not intended to communicate a story but rather create an intriguing visual poem. He has developed a unique style and method of working in recent years. Brian paints with transparent “acrylic on a smooth substrate.” Much like a watercolor artist, he does not paint with white but rather relies upon the painting surface for the lightest values in his work. He applies paint with knives, squeegees, brushes and alternative mark making tools to create unique paint applications that echo the natural world. Glass beads and iridescent paints are often incorporated into the surface to alter the appearance of the image as the lighting and angle of view shift.

William Song’s “Tonal Resonances” paintings strive to align us to the stillness within a motion – to the ‘cohesive unity of the present moment, independent of time or place.”Moments of color, like musical notes, shape harmonic relationships.  In a painting, each color is a tonal frequency in a vibrative electromagnetic field. William’s attention is on the purity and clarity of energy and relationships within that field. Paintings have the capacity to resonate with awareness. Such radical experiences have a significance, depth and coherence beyond the limitations of mind, memory, sensory perception and instinct.  They are still points within a world pulsing with fragmentary change.

The  tall cathedral wall of the Atrium is divided between two artists who are exhibiting their work in different medias of the same or similar subject matter of another one of their works on display.

Steffon Moody’s show “Fear and Inspiration” has ink drawings and oil paintings. This show is his way of gaining some sort of control, acceptance and even redemption in the face of the tumult we call our current reality. In 2017, Steffon participated in Inktober – a  challenge for artists from all over the world to do one ink drawing a day the entire month of October. A lot of narrative imagery came out which he didn’t expect – and he is bringing a sampling of those drawings. For this VCA October show, he is accompanying each ink drawing with a large oil painting of the same imagery. His ‘drawings-become-paintings’ large (4’ x 5’) in size – theart matching the scale of the architectural setting of the tall ceilings in the VCA atrium where his art will be showing. Steffon says, “They aim at evoking a strong emotional response in the viewer.  Now is not the time for relegating our artistic inheritance to just being a commodity that matches the drapes. It is time to say something. It is in this spirit that I created this work.”

Gradually over the last several years Kris Hurwit has been experimenting with and incorporating fiber art as a new medium after working as a painter and printmaker since 2005 Her show of wolves will have monotypes, oil and fiber arts. The impetus for the creation of her exhibition at VCA came from her interest in the reintroduction of wolves to the Western United States. In 2011, Kris began following the travels of OR-7, a male grey wolf who in that year left his pack in the Wallowas in search of territory and a mate. He travelled, heroically, nearly 1,000 miles through Oregon and Northern California over the course of several years. Eventually he found a mate in 2014 and they have so far produced two litters. Currently the pack is living in southwestern Oregon. The tenuous return of the wolf—the contingency of it–is what she seeks to capture through her imagery, as well as the powerful essence of the animal itself. She hopes to illuminate the emerging presence of wolves both by isolating their figures and also by creating a sense of incompleteness.

The Gift Shop will be sparkling with Julie Prather’s unique glass lamps and mirrors. As a stained glass artist, she had left over scrap glass and didn’t want it to go to waste. For the past 40 hears she’s made lamps and mirrors from these recycled materials, some gifted to her by her neighbors in Ellensburg, Washington.  Each piece is a one-of –a-kind creation and brings beauty and wimsy wherever they are displayed.