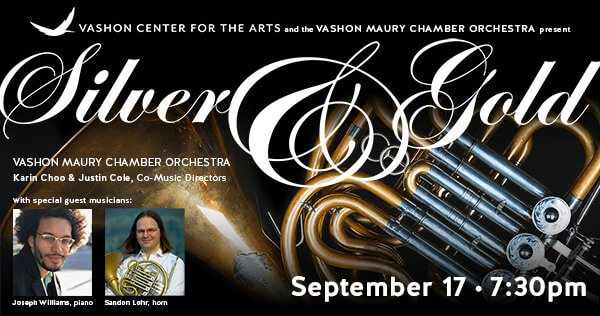 Dedicated to cultivating classical music in our community, the Vashon Maury Chamber Orchestra is comprised of 18-10 island musicians and has been performing for nearly 30 years. In addition to local talents, VMCO welcomes guests Sandon Lohr and Joseph Williams, directed by Karin Choo and conductor Justin Cole. THE PERFORMERS: Karin Choo, Director, is a seasoned classical violinist and orchestral director. She has a degree in Violin Performance from the New England Conservatory and a second one in Economics from Tuft University. In addition to directing the Vashon Maury Chamber Orchestra, she also serves as Executive Director of Northwest Sinfonietta, Co-concertmaster of the Olympia Symphony, and Concertmaster for the Vashon Opera.

Sandon Lohr is joining the Chamber Orchestra for this performance from the Tacoma Symphony where he is the Assistant Principal on Horn. Sandon studied horn performance at Carnegie Mellon University and the New England Conservatory. He has played the French Horn in various regional groups including the Boise Philharmonic and the Spokane Symphony.

Joseph Williams is a classical pianist and educator from Tacoma who has performed in venues worldwide from The John F. Kennedy Center to Dubai’s Al Jalila Cultural Center for Children. A passionate advocate for accessible music education, he is the Founder and Director of the non-profit Tukwila Kids Make Music and an instructor at Key to Change.