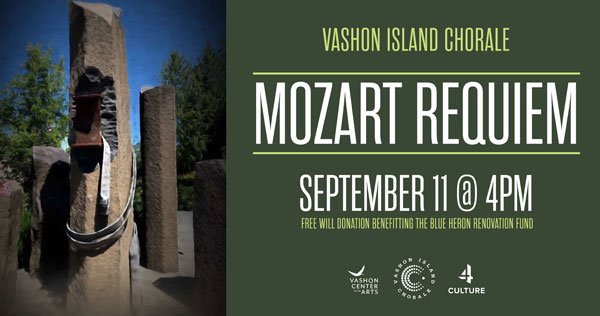 Mozart composed the torso of his Requiem in the year of his death, but left it unfinished. His student Franz Xaver Süßmayr completed the work. For over two hundred years, their music has helped people all over the world to reflect and to mourn. The event commemorates the 21st anniversary of the 9/11 attacks in New York, Washington DC, and rural Pennsylvania, in a tradition begun in 2002 called the “Rolling Requiem.” (Last year’s 20th-anniversary commemoration was postponed due to covid.) On this date, choirs around the world share in presentations of Mozart’s Requiem to unite everyone in remembrance of that tragic occasion.

While there is no charge to attend, your generous donations will support the modernization of VCA’s Blue Heron Education Center.