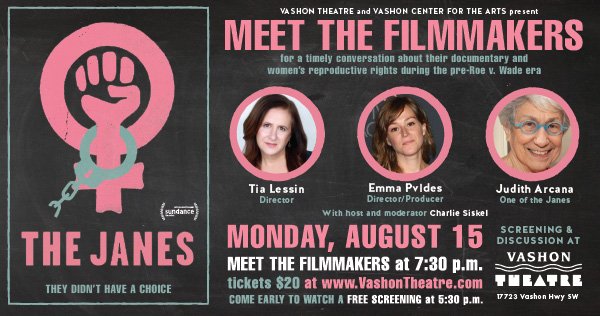 Vashon Theatre and Vashon Center for the Arts have joined together to co-present an evening in two-parts: A free screening of the documentary film THE JANES, followed by a ticketed event to MEET THE FILMMAKERS, Directors Tia Lessin and Emma Pildes, for a timely conversation about this urgent and relevant documentary that examines women’s reproductive rights during the pre-Roe vs. Wade era. Joined by host Charlie Siskel, a documentary filmmaker, lawyer and Vashon resident.

Part I
Free public screening of the THE JANES on Monday, August 15, at 5:30PM at the Vashon Movie Theater.

THE FILM:
THE JANES is the story of an underground network of women in Chicago in the late 60s and early 70s who provided safe, affordable, illegal abortions to women in need.

In the spring of 1972, police raided an apartment on the South Side of Chicago where seven women who were part of a clandestine network were arrested and charged. Using code names, fronts and safe houses to protect themselves and their work, the accused had built an underground service for women seeking safe, affordable, illegal abortions. They called themselves Jane.

Directed by Oscar®-nominee Tia Lessin (HBO’s “Trouble the Water”) and Emmy®-nominee Emma Pildes (HBO’s “Jane Fonda in Five Acts”), THE JANES offers first-hand accounts from the women at the center of the group, many speaking on the record for the first time.

THE JANES tells the story of a group of unlikely outlaws. Defying the state legislature that outlawed abortion, the Catholic Church that condemned it, and the Chicago Mob that was profiting from it, the members of Jane risked their personal and professional lives to help women in need. In the pre-Roe v. Wade era –– a time when abortion was a crime in most states and even circulating information about abortion was a felony in Illinois –– the Janes provided low-cost and free abortions to an estimated 11,000 women.

TIA LESSIN (Director): Tia Lessin was nominated for an Academy Award for her work as a director and producer of the Hurricane Katrina survival story “Trouble the Water,” winner of the 2008 Sundance Grand Jury Prize and the Gotham Independent Film Award. She directed and produced “Citizen Koch,” about the rise of the Tea Party in the Midwest, which also premiered at Sundance and was shortlisted for an Oscar in 2014. “The Janes” is the third feature-length documentary that Tia has directed. In 2001, Tia received the Sidney Hillman Award for Broadcast Journalism for directing the documentary short “Behind the Labels” about the labor trafficking of garment workers on U.S. Saipan.

Tia was on the producing teams of Palme D’Or winning “Fahrenheit 9/11,” Academy Award winning “Bowling for Columbine,”and the Grammy-winning “No Direction Home: Bob Dylan.” She produced the film “Where to Invade Next” and executive produced “Fahrenheit 11/9.” Her work on the 1998/99 television series “The Awful Truth” earned her two Emmy nominations, one arrest, and a lifetime ban from Disneyland.

Tia is a past fellow of the Open Society Institute and the Sundance Institute and has served as an advisor to IFP, Sundance and Creative Capital artists. Her filmmaking has been supported by The Bertha Foundation, Chicken & Egg, Cinereach, Creative Capital, The Ford Foundation’s JustFilms, Fork Films, the International Documentary Association’s Pare Lorentz Fund, the MacArthur Foundation, New York State Council on the Arts, Rockefeller Brothers Fund and the Sundance Institute Documentary Film Program. She is a member of the Academy of Motion Picture Arts & Sciences and the Directors Guild of America.

EMMA PILDES (Director/Producer): Emmy-nominated filmmaker Emma Pildes has an extensive background in, and boundless love for, non-fiction storytelling. “The Janes” is Emma’s directorial debut. As one of Pentimento Productions’ principal producers, Emma produced “Spielberg,” “Jane Fonda in Five Acts,” and “Very Ralph” — all for HBO Documentary Films. “Spielberg” had its world premiere at the New York Film Festival in 2017 and was later nominated for an Emmy. “Jane Fonda in Five Acts” had its world premiere at Sundance Film Festival in 2018 and its international premiere at Cannes Film Festival. The film was nominated for the 2019 Emmys.

At PBS’ American Masters, Emma helped to produce the Emmy and Peabody-award winning “LennoNYC,” Emmy-award winning “Inventing David Geffen,” as well as “American Masters: Billie Jean King.” Born and raised in Chicago, Emma graduated from Sarah Lawrence College and is based in Brooklyn, NY. She is a member of the Directors Guild of America.

JUDITH ARCANA: Judith Arcana is a Jane, a member of the Chicago underground service that helped thousands of women and girls get safe illegal abortions before the US Supreme Court ruled on Roe v. Wade in January of 1973. She’s a skilled performer/presenter who has worked with audiences in the US, Britain and Canada, often visiting campus and community groups to talk about reproductive justice and perform her powerful writing. A longtime teacher of literature, writing and women’s studies, Judith has a PhD in Literature, an MA in Women’s Studies, an Urban Preceptorship in Preventive Medicine and a BA in English. She’s taught in high schools, colleges, libraries, living rooms, a state prison and a county jail.

ABOUT CHARLIE SISKEL (Host/Moderator): Charlie Siskel is an award-winning American film and TV writer, director and producer. Siskel’s documentary Finding Vivian Maier was nominated for an Academy Award, Emmy Award, Writers Guild Award, and Directors Guild Award. His film, American Anarchist, premiered at the Venice International Film Festival. Siskel’s earlier work as a producer includes the Academy Award winning film Bowling for Columbine with Michael Moore and the film Religulous with Bill Maher. Siskel’s television credits include documentary and comedy shows from the Emmy nominated The Awful Truth (also with Michael Moore) and Triumph the Insult Comic Dog Election Special to his own critically acclaimed shows Crossballs and Review on Comedy Central as well as Important Things with Demetri Martin and Tosh.0.