TALK on the Rock | Martin Criminale 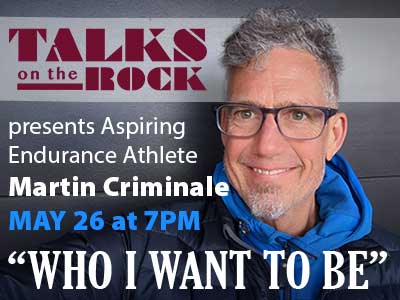 Endurance athlete, Martin Criminale came to athletics relatively late in life.  “In college some guys I looked up to rode bicycles. Since they were cool, by association cycling was cool and I gave it shot. Soon I was all in and racing in every cycling discipline there was back in the early 90s (road, track, mountain bike, and cyclocross).”

After about 20 years of total emersion in cycling, he had a bad mountain bike accident and separated his shoulder. While recovering it hurt less to run than to ride and since he had already been dabbling in running as “cross training” he decided to switch his focus. As is obviously his nature, he went all in here as well. He chose trail running over road running, and gravitated toward the longer “ultra” events. Criminale has identified as a runner since 2012, but says he still loves cycling!

“During my athletic career, I have numerous ups and downs but one constant is that I love being active, being out in the woods, and exploring/adventuring no matter what the speed. If I can get you excited about being outside and moving, mission accomplished!”

This event will have in-person seating for a limited capacity in the Kay White Hall.
It will also be Live-streamed on the VCA website and YouTube page.