Shaping Movement: An Embodied Conversation on Dance and Body Image 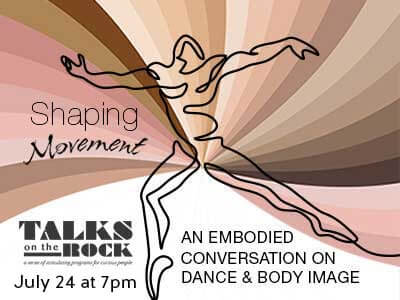 Body image. Body shaming. Eating disorders. These are difficult issues commonly experienced by dancers and athletes pressured to conform to particular physical and aesthetic standards, and often affecting others who live in a culture focused on appearances. Yet open and public conversations about the sensitive topics are not so prevalent nor so common.

Vashon Center for the Arts has collaborated with former professional ballerina Connie Flachs to present Shaping Movement: An Embodied Conversation on Dance and Body Image, a panel of dancers and therapists designed to shed light on these cultural problems — the expectations and isolation; the deconstruction of damaging status quos and need for compassionate community — that play out in ballet, modern dance, hip hop, race, gender and sexuality.

Josh Spell is a licensed clinical social worker in the state of Washington and currently works in private practice in Seattle, WA. Before beginning his practice, Josh worked in the eating disorder field working with clients in residential, partial hospitalization intensive outpatient and outpatient levels of care. He earned a master’s degree in social work from the University of Washington and received his undergraduate degree from Seattle University. Josh was a dancer with Pacific Northwest Ballet from 2001 to 2011 and also danced with Kansas City Ballet for two seasons. He trained at the School of American Ballet and attended Summer Courses at Pacific Northwest Ballet School. Josh danced a wide range of repertoire from George Balanchine to Twyla Tharp. Among his favorite roles were the second sailor in Jerome Robbin’s Fancy Free, Puck in George Balanchine’s A Midsummer Night’s Dream, Benvolio in Jean-Christophe Maillot’s Roméo et Juliette and roles in Sechs Tänze and Petite Mort by Jiri Kylián. Josh has returned to the dance world in a new role as consulting therapist for the Pacific Northwest Ballet school and Whim W’Him. Josh works with professional dancers and students all over the country centering dance from an embodied and holistic perspective; offering a wide variety of mental health tools. He has given various seminars on self-compassion, body image, self-care, perfectionism and identity. Josh’s former career as a professional ballet dancer informs his current approach, and he is passionate about working with dancers.

Monica Van Winkle, MS, RD is a registered dietitian, specializing in sports nutrition and eating disorders. She owns Nutrition in Action, where she helps athletes discover attuned eating to thrive in sport and the performing arts. She is a performance nutrition consultant for Pacific Northwest Ballet, Seattle Pacific University, and TN Multisports.

Previously, Monica spent eight seasons as the Sports Dietitian for the Seattle Mariners and five seasons as the Sports Dietitian in the University of Washington athletic department where she was an affiliate faculty member for the UW Physicians Sports Medicine Fellowship. She is passionate about teaching nutrition students and other healthcare providers to provide state-of-the-art, compassionate care grounded in science. Most recently (November 2018), Monica lectured to nutrition and culinary students, athletic trainers, sports scientists, and sports medicine physicians in Osaka, Japan.

After completing her Master’s of Science in Nutrition at Boston University, Monica received additional training in eating disorders and adolescent health as a LEAH Fellow at Boston Children’s Hospital. She worked as a clinical dietitian at Massachusetts General Hospital and created and directed the residential nutrition program at the Cambridge Eating Disorder Center.

Monica has served as a board member with the International Association of Eating Disorder Professionals (IAEDP) – Puget Sound Chapter. She has special interests in the intersection of eating disorder recovery and sustainable agriculture, and working with athletes in the performing arts, as well as those who’ve sustained traumatic brain injuries.

Erica Lynette Edwards is an accomplished consultant and public speaker who champions change to advance social justice. With diversity, equity, and inclusion as the core foundation of her work, she transforms visions into reality. After a rewarding 15-year career as a ballerina at The Joffrey Ballet and five years as the Director of Community Engagement, she founded Cultivating Better Tomorrows. Through this consulting company Erica reshapes the dynamics of performing arts communities to produce environments where all can thrive. Highly skilled in delivering consistent success and effective change, she is passionate about facilitating results driven conversations and workshops focused on reflection and knowledge building. Her visionary leadership has earned her many honors and opportunities, including speaking on national panels, giving a TEDx talk, and being selected as a member of Crain’s Chicago Business “40 Under 40.” By developing shared understandings, Erica inspires communities to make the world a more just place.

Noelle Price is a contemporary creator from Detroit, MI. Price received her Bachelor of Arts in Dance from Western Michigan University before moving to Seattle, WA. She wrote/performed her one woman play Death and Other Rude Things in 2016. In 2019, Seattle Dances awarded Noelle a Dance Crush for her commitment to advocacy through dance.  Price has worked the last 3 semesters as an adjunct instructor at Cornish College, presented at the DEAW conference in 2020, and holds the title of co-chair for the Black Alumni Advisory Council (BAAC) at her alma mater West Michigan University. Noelle is the Executive Director of PRICEarts and a founding member of  PRICEarts Never Ending Work dance project.