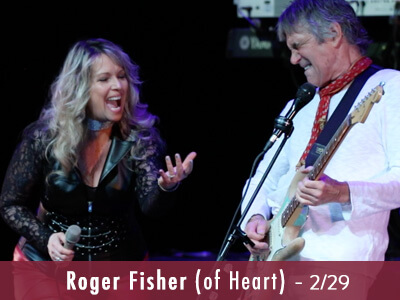 The music of HEART has captivated radio and live audiences for decades. Original member Roger Fisher co-wrote many of the band’s early hits including, “Barracuda” and “Crazy on You” which have stood the test of time and been covered by countless artists and featured in film, television and the video game Guitar Hero. Inducted into the Rock & Roll Hall of Fame in 2013, Fisher has played in every major city in North America many times. He has also toured Europe, Japan, Australia, Uzbekistan and Russia, and performed at massive events in the Czech Republic, Japan, Canada and the United States for more than 300,000 people at a single rock show.

Experience a night of HEART classic rock favorites and new music with Roger and a world-class band featuring the vocal talents of Carol Ann Wood in the intimate Kay White Hall.