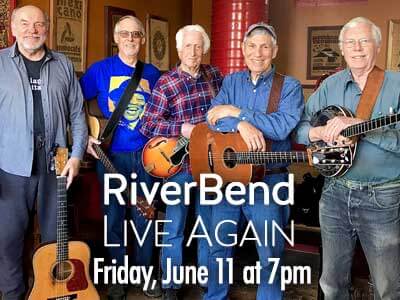 RiverBend performs mostly Bluegrass, Old Time Country and Folk; band members are Paul Colwell, Peter Larsen, Chuck Roehm, Dick Gordon and Mike Witmer. Paul is well known for playing with numerous Island groups as well as Internationally with The Colwell Brothers, the Sing Out, and Up with People groups. Chuck & Peter played as part of the island band The Garage Boys, and Peter also played in the island group Down Yonder as well as a popular German group called Kampfire in Hamburg. Dick has a wide breadth of musical talent; he was a member of the popular Seattle band Rag Daddy in the 1970’s, played on the island at Sound Food, Al and Tony’s Pizza and with the Garage Boys and the Geezers. Mike Witmer has performed in popular Blues Bands over the last 30 years and hosts the Blues program on VOV Monday nights.

Thanks to the generosity of Paul, Peter, Chuck, Dick and Mike all proceeds from the show go directly to supporting VCA’s programs

and day-to-day operations so we can continue serving up the arts to our island community!

This event will have in-person seating for a limited capacity in the Kay White Hall. It will also Livestream on the VCA website and YouTube page.

Tickets will be available for purchase at the door. Doors open at 6:30pm.