Rise Up! The Hamilton Tribute Band 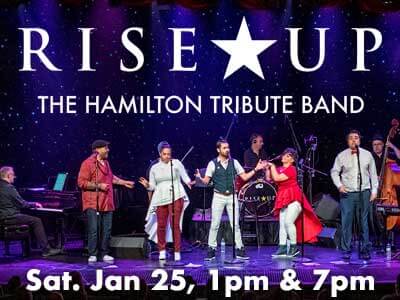 Rise Up, the Hamilton Tribute Band! is coming to the Kay White Hall! Rise Up is an ensemble of top Seattle vocalists and musicians that performs the amazing music of “Hamilton”. “Hamilton” is a record-breaking Broadway musical and winner of 11 Tonys including Best Musical. It is a sweeping national cultural phenomenon with music that marries hip hop, R&B and Broadway.

Rise Up delivers a performance that captures all the sophistication, detail and emotion of the music of “Hamilton”. Rise Up has performed extensively in the Northwest, selling out venues including The Triple Door in Seattle, Washington Center for the Performing Arts in Olympia, Rialto Theater in Tacoma, Alberta Rose Theatre in Portland, and many others. Rise Up was named runner up for Best New Musical Act in Seattle Weekly’s Best of Seattle 2018.