Olympic Cougar Project – TALKS on the Rock with Mark Elbroch 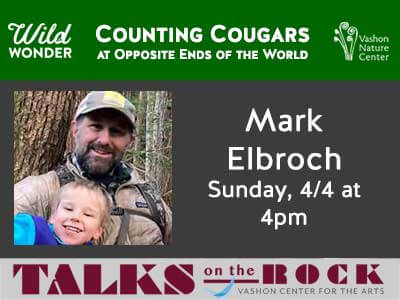 “Counting Cougars at Opposite Ends of the World”
with Mark Elbroch, Olympic Cougar Project

Mark Elbroch is a father, writer, mountain biologist and Director of Panthera’s Puma (Cougar) Program, for which he designs and implements cougar conservation research in North and South America. Mark has contributed to mountain lion research in Idaho, California, Colorado, Wyoming, Washington, Mexico and Chile. His work with mountain lions has been covered by National Geographic, the BBC, National Public Radio, The New York Times, Scientific American, and The Washington Post, among others. Mark is twice a National Geographic Explorer, a 2011 Robert and Patricia Switzer Foundation Fellow (for environmental leadership), and the 2017 recipient of the Craighead Conservation Award for “creating positive and lasting conservation outcomes.”

Mark has also authored/coauthored 10 books on natural history, including two award-winning books on wildlife tracking and the Peterson Reference Guide to the Behavior of North American Mammals. His most recent book is The Cougar Conundrum: Sharing the World with a Successful Predator, published by Island Press. More about Mark can be found at https://markelbroch.com/.

The Talks on the Rock Wild Wonder series is part of a “Year of Wild Wonder” celebrating island natural history. VCA shares a portion of donations with Vashon Nature Center to support the opening of the Wild Wonder natural history exhibit at Vashon Heritage Museum in 2021 and a year of talks, activities and workshops about nature and our place in it.

Suggested donations of $10 or more will support this and future Talks. Thank you for your support.