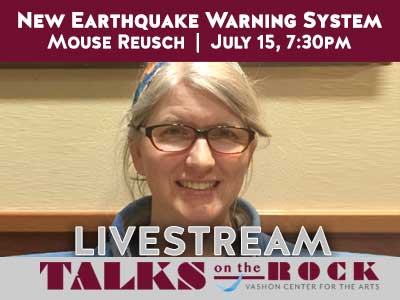 What would you do if you knew that the shaking from an earthquake was about to rock your location in 15 seconds? Mouse Reusch, regional ShakeAlert coordinator with the Pacific Northwest Seismic Network (PNSN) at the University of Washington, will discuss the development and future public release of the ShakeAlert Earthquake Early Warning program. After earning her doctorate from Penn State University, Reusch worked for a lending library of seismometers. During that period she spent some 12 years traveling all seven continents installing seismic stations. An expert in earthquakes and seismic risk, she joined the PNSN in 2016 to facilitate the build-out of seismic stations and the implementation of the ShakeAlert system in Washington and Oregon.

A Q&A session will follow Mouse’s talk, facilitated by Vashon Islander, Rick Wallace. Rick, VP of VashonBePrepared, has an extensive award winning background in radio and television news, and has leadership roles in numerous island institutions, including Vashon Emergency Operations, Voice of Vashon, the Save Our Clinic fundraising campaign, and the Fire District levy renewal campaign.

If you are a TALK Pass holder and would like us to apply a lecture to your pass, please let us know via email or message at 206.259.3007