Mike Veseth – Around the World in Eighty Wines 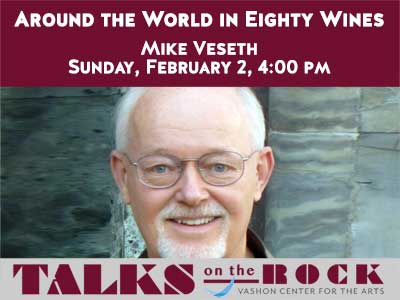 Mike Veseth is editor of the award-winning The Wine Economist blog and author of four books on wine over the last decade: Wine Wars; Extreme Wine; Money, Taste & Wine: It’s Complicated; and most recently, Around the World in Eighty Wines. By profession, he is a political economist, and is professor emeritus of international political economy at the University of Puget Sound. His writings on wine and globalization have been widely praised, and he is a sought-after speaker at wine industry meetings around the world. Inspired by Jules Verne, he takes us on a mad global dash, collecting wines and their stories, not just to find the best wines, but to understand what they mean and why they are important to us. The lecture will be followed by a wine tasting hosted by Vashon wineries.

Sunday, February 2, 4:00pm
Tickets: $10 in advance, $15 at the door | $5 for youth
Following the lecture, join us for a wine tasting with Palouse Winery, Pollard Per Se, Alli Lanphear Vineyard & Winery, and Precept Winery.