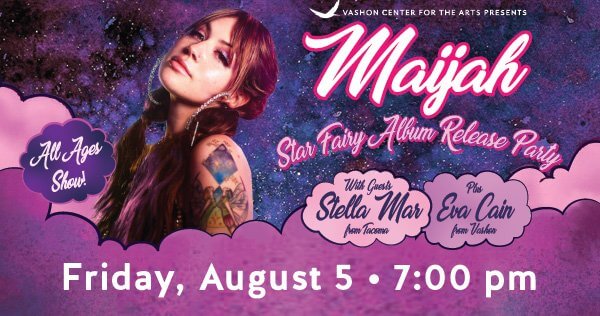 Island-raised pop star Maijah returns for a sparkly, starry dance party to celebrate her debut EP: “Star-Fairy!” After many Vashon performances as a teen, Maijah is back for her first solo headlining show on Vashon. Join us at the Kay White Hall on First Friday for a night of charming lyrics, powerhouse vocals, and divine feminine energy — including openers Eva Cain and Stella Mar.

Maijah is a sparkly, starry, singer-songwriter blending modern day topics with metaphysical symbolism. Making “Main Character Music” — the artist’s self-proclaimed genre — every time Maijah appears in a song, the listener can’t help but feel like the main character of their own movie. A lyricist at heart, Maijah aims to inspire, empower, and charm those who listen to her music through raw authenticity and a sprinkle of magic. With musical influences including the likes of Doja Cat, Amy Winehouse, Jorja Smith, Sabrina Claudio, and Adele, Maijah brings a jazz and R&B inspired style to the table while introducing fresh ideas of current pop.

Stella Mar makes music that’s an a malgamation of all the hurdles she’s cleared (or crashed over) in her life, those she chose to navigate and those forced in front of her. But no matter. You could put a brick wall in front of Mar and that would cease to exist if it challenged her dreams. Now, with a voice that’s part-Jeff Buckley, part-Arlo Parks, Mar is poised to release her debut record, White Noise, in 2021. The concept album, a blend of electronic production and acoustic guitar, details the rippling effects of heartbreak. From bouts with self-doubt to melodies borne of streaming tears, the record achieves immense sonic heights.