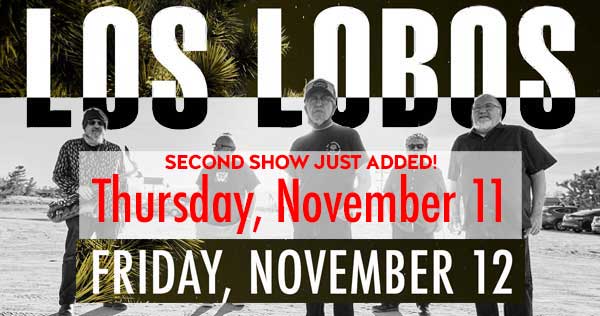 Vashon Center for the Arts is thrilled to welcome Los Lobos to Kay White Hall!

For all the trailblazing musical acts who’ve emerged from Los Angeles, very few embody the city’s wildly eclectic spirit more wholeheartedly than Los Lobos. Over the last five decades, the East L.A.-bred band has made an indelible mark on music history by exploring an enormous diversity of genres—rock-and-roll and R&B, surf music and soul, mariachi and música norteña, punk rock and country—and building a boldly unpredictable sound all their own.

Originally finding their footing in L.A.’s punk/college-rock scene, Los Lobos began sharing bills with bands like Public Image Ltd. and the Circle Jerks. After making their major-label debut with 1984’s critically lauded How Will the Wolf Survive?, they went on to achieve such triumphs as contributing a smash-hit cover of Ritchie Valens’s signature song “La Bamba” to the 1987 biopic of the same name, winning three Grammy Awards, collaborating with the likes of Elvis Costello and Ry Cooder, and earning massive worldwide critical acclaim.

Los Lobos has sold millions of records, won prestigious awards and made fans around the world. But perhaps its most lasting impact will be how well its music embodies the idea of America as a cultural melting pot. In it, styles like son jarocho, norteño, Tejano, folk, country, doo-wop, soul, R&B, rock ’n’ roll and punk all come together to create a new sound that’s greater than the sum of its parts.

Proof of vaccination is required for entry to performances in the Kay White Hall theatre. Ticket-holders are required to show proof of vaccination or a documented negative Covid test result taken within 72-hours prior of the event. VCA also requires visitors wear masks at all times.