LeRoy Bell & His Only Friends 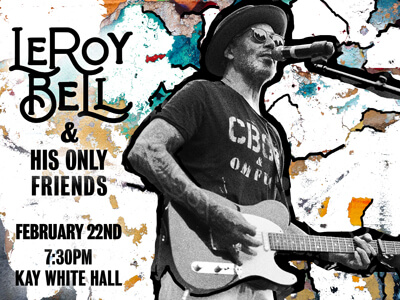 Acclaimed singer and songwriter, LeRoy Bell will be rocking the Kay White Hall with His Only Friends on February 22. Bell is known as a dynamic performer in his own right, but along with long-time co-writing partner, Casey James, has also penned many hits recorded by the likes of Elton John, The Spinners, The O’Jays, The Temptations, Gladys Knight & the Pips, Teddy Pendergrass and many others.

In 2011, Bell appeared on the American version of The X Factor, finishing 8th overall in competition.

LeRoy will be backed up by his band Only Friends, featuring Terry Morgan on bass, Davis Martin on drums, and Daniel Walker on guitar and keyboards. All are experienced musicians. Morgan had played with Dee Daniels, Pat Wright & The Total Experience Gospel Choir, Dave Lewis, Thelma Houston and others, whereas Martin was previously a member of the band Maktub.