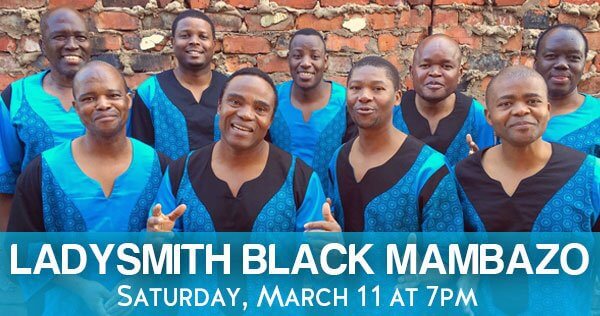 Ladysmith Black Mambazo was assembled in the early 1960s in South Africa by Joseph Shabalala, then a young farmboy turned factory worker. The group took the name Ladysmith Black Mambazo: Ladysmith, the name of Joseph’s hometown, about three hours west of Durban and 3 hours east of Johannesburg; Black being a reference to the oxen, the strongest of all farm animals; and Mambazo being the Zulu word for chopping axe, a symbol of the group’s ability to “chop down” any singing rival who might challenge them. Their collective voices were so tight and their harmonies so polished that by the end of the 1960’s they were banned from competitions, although they were welcome to participate as entertainers.

During the 1970’s and early 1980’s Ladysmith Black Mambazo established themselves as the most successful singing group in South Africa. In the mid-1980s, Paul Simon visited South Africa and incorporated the group’s rich tenor/alto/bass harmonies into his famous “Graceland” album – a landmark recording that was considered seminal in introducing world music to mainstream audiences. Over the years, they also collaborated with Dolly Parton, Josh Groban, Emmylou Harris and more; the group appeared in the Michael Jackson film Moonwalker. In 1993, they accompanied Nelson Mandela to his Nobel peace prize ceremony in Oslo.

Shabalala retired from Ladysmith Black Mambazo in 2014 and passed away in 2020, but four of his sons perform in the current lineup. The group have been nominated for 17 Grammy awards, winning five, most recently for best world music album in 2017.