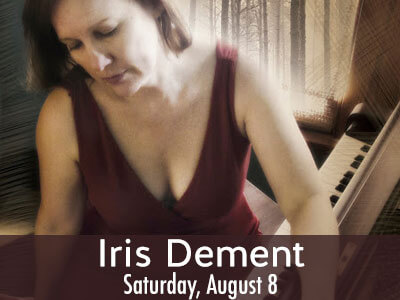 Iris DeMent is an acclaimed singer/songwriter whose 1992 debut Infamous Angel was hailed by Rolling Stone as “an essential album of the 90’s”. Combining elements of folk, gospel and country, her rich lyrical landscapes and captivating music have earned two Grammy nominations and the respect of many of her peers such as John Prine, Emmylou Harris and Rodney Crowell. NPR has called her “one of the great voices in contemporary popular music” and The Boston Globe heralded her 2012 album Sing The Delta to be a “work of rare, unvarnished grace and power…”.

“As pure and piercing as they come.” – No Depression

“Iris DeMent makes music that celebrates humanity’s efforts toward salvation, while acknowledging that most of our time on Earth is spent reconciling with the fact that we don’t feel so redeemed.” – NPR Music

Iris Dement, alone on the baby grand piano in the intimate Kay White Hall. You won’t want to miss this!