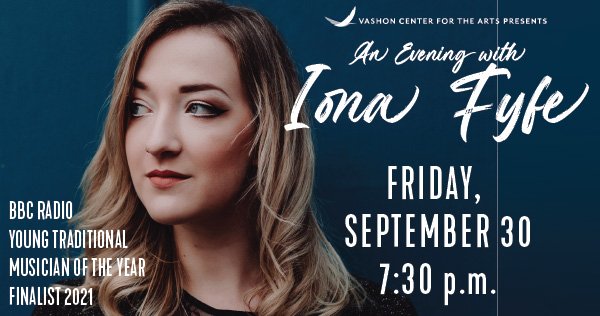 Aberdeenshire folksinger Iona Fyfe has become one of Scotland’s finest young ballad singers, rooted deeply in the singing traditions of the Northeast of Scotland. Winner of the Scots Singer of the Year 2018, and Musician of the Year 2021 (the first singer to do so) at the MG ALBA Scots Trad music awards. She is described as ‘one of the best Scotland has to offer.’ (Global Music.de) She will make her Vashon Island debut at Kay White Hall on September 30.

She has toured throughout the UK, Poland, France, Germany, Austria, Italy, Switzerland, Czech Republic, Canada and Australia, and performed with the BBC Scottish Symphony Orchestra as part of the World Premiere of Disney Pixar’s Brave in Concert at GlasgowRoyal Concert Hall. In 2018, Iona performed at Interceltique Festival De Lorient where she was described as “a Scottish folksinger, magical and charismatic” (Rolling Stone, France). She was nominated for “One to Watch” and “Best Live Performance” at the Sunday Herald Scottish Culture Awards 2018, was a finalist in the BBC Radio Scotland Young Traditional Musician of the Year for 2017 and 2021, and won the 2017 Molloy Award at Birmingham Irish Trad Fest.

Iona’s debut album Away From My Window was held to critical acclaim. A follow up, released in 2019, Dark Turn of Mindis Iona’s first EP entirely in English, and features six ballads and songs found in both Appalachia and Aberdeenshire and has been described as “a new interpretation to the country genre”–Maverick.In 2020, Iona was invited to be an Official International Showcase Artist at Folk Alliance International held in New Orleans, resulting in an invitation to perform for the Library of Congress’s Homegrown concert series.