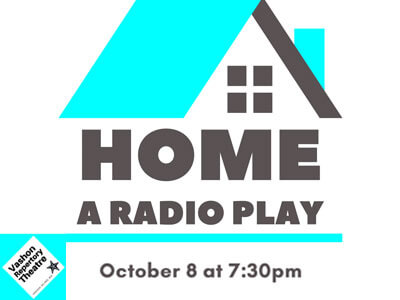 A collection of short radio plays about the places we call home. Co-produced with Northwest Playwright’s Alliance.

Scroll to the bottom of this page for cast list and biographies.

Vashon Repertory Theatre is a collective of professional theatre artists who live on Vashon Island and the South Puget Sound region. According to the company’s Producing Artistic Director, Charlotte Tiencken, “VRT’s mission is to produce exceptional theatre that is thought-provoking, intimate, story-driven and brings to light issues that are meaningful to our time and place on earth. We are a group of artists who strive to make a difference in our community and the world.”

Tiencken, adds “This theatre group is a long time coming for Vashon. There are so many amazingly talented theatre artists living on the island.” Tiencken and the other members of VRT are initiating the company because they believe it is time to utilize this wealth of local talent to produce evocative professional theatre that uses high quality stories to explore issues relevant to our lives today.

Because of Covid-19, the season will start with performances of radio plays, that will be broadcast on Voice of Vashon, and streamed online through Vashon Center for the Arts.

On October 30 at 7:30pm, Vashon Repertory Theatre will present The War of the Worlds- Orson Welles’ Iconic broadcast from 1938 will be revived using local actors, directed by Charlotte Tiencken.

In February of 2021, Vashon Repertory Theatre will present a production of The Exonerated by Jessica Blank and Erik Jensen. Originally produced for The Innocence Project, The Exonerated tells the true stories of six people sentenced to death-row for crimes they didn’t commit. Co-sponsored by the Criminal Justice Team of Vashon-Maury Showing Up for Racial Justice (SURJ). The Exonerated will be staged at the Vashon Center for the Arts at a date to be determined.

Finally, Vashon Repertory Theatre will present a festival of theatre in the summer of 2021, slated to include outdoor performances of Woody Guthrie’s American Song by Peter Glazer with musical direction by Kat Eggleston, directed by Charlotte Tiencken; and a production of William Shakespeare’s The Tempest directed by Darragh Kennan. Stay tuned for more information on these two performances.

Rowin Breaux is a newcomer to the stages of the PNW and is excited to start with Vashon Repertory Theatre performing via the airwaves. Rowin has previously been seen in Minneapolis Children’s Theatre Company’s( CTC ) productions of “Cinderella,” “How the Grinch Stole Christmas” and “Matilda the Musical.” Rowin had the privilege of being the 2018-2019 Performing Apprentice at CTC and over the span of the year understudied for productions “Last stop on Market Street” and “The Hobbit.” Rowin did not elect to go to college but he did attend Idyllwild Arts Academy. Rowin would like to remind everyone to be safe and that black lives matter.

Amy Broomhall is a local actor hailing originally from Australia and returning to her theatrical home after a somewhat lengthy hiatus. You might have seen her at the Vashon 14/48. She has a soft spot for radio plays, having been a voice actor for many years. In these crazy times, the arts are more important than ever, and she hopes you feel that electric connection despite not being able to feel the heat of the lights.

Emily Bruce is a long-term islander who has always enjoyed theater. She was last seen in “The Vagina Monologues” and “My Mother, Myself.” This radio show is a light in the dark during these grim times. She is so grateful to be a part of this fun show.

Tami has been performing since her debut at 2 years old singing “On The Goodship Lollipop” at Sears (to the surprise of her parents and store employees).  She has a BA in theatre from the University of Washington and recently starred in her first feature film, “An Accidental Zombie Named Ted,” which keeps winning awards on the festival circuit. You can find Tami playing Ann Filson of The Famous Filson Sisters in live shows and on The BROADcast podcast. Tami sends gratitude and love to Paco, Raena and Johnny, who continue to be supportive of her many extracurricular pursuits.

Jeanne has appeared in “Kissing the Joy As It Flies” at Vashon Center for the Arts (VCA); “Dragon Country” with Vashon’s Civic Rep Theatre; “33 Variations” at VCA; 14/48 on Vashon; and the Church of Great Rain comedy troupe.  In an earlier life she appeared in Horatio at the Arena Stage in Washington D.C.  Los Angeles credits include “Ionescapade” at the Odyssey Theatre; “Transformations” at Los Angeles Actors Theatre; “Going to See the Elephant” at the the DeLacey Street Theatre. She appeared opposite Paul Winfield in the award winning production of “Like One of the Family” at Theatre West.

Kate Dowling graduated 1.3 million years ago from the University of Guelph in Ontario, Canada with a BA in Theatre Arts.  She was active in theatre in Friedberg, Germany, entertaining both the US military community and German theatre-goers alike. Currently, Kate is executive director for the Voice of Vashon and in her spare time you can hear her on KVSH 101.9, ‘Kate and Doug in the Morning’ or ‘Chris Austin’s Mostly True Radio Show’. Kate is filled with gratitude to be a part of the Vashon Repertory Theatre and part of the Vashon community.

Kat is a singer, guitarist, songwriter and actor who has performed and taught internationally for more than thirty years, and created many solo and collaborative recordings of original and traditional music, distributed world-wide. She has appeared onstage at Chicago’s Briar Street Theatre, the Steppenwolf Garage Space, Chicago Children’s Theatre, and the historic Victory Gardens Theatre in the acclaimed “Snow Queen,” along with its composer Michael Smith. Kat’s latest project, “The Cyclone Line,” is an original play with music; the story of her father as an old man recalling his childhood in the dustbowl.

(Actor/theatremaker/physical comedian) has lived and worked in Seattle, Paris and New York with additional artistic residencies in Canada, Europe, Asia and The Middle East but her heart and home is Vashon. Island audiences know her from her solo shows: Split Second, Shadows and House #30; her work with UMO Ensemble, Church of Great Rain, Sandbox Radio Live, 14/48, Gravity of Kindness, Funny Bones workshops; and this summer, with her Covid Street Messaging (Big Red Mask-up, The Nose Knows, Human Kind) and Open Space’s Distance Dance pop-up in the windows of VOV. mikkuhlman.com

Susan McCabe is a veteran radio broadcaster, sometime producer and dabbler in sketch comedy with Vashon’s Church of Great Rain crew.  Most of all, she loves theatre and another opportunity to work with Charlotte Tiencken on staging good material for the region.

Ming Montgomery has previously been working in the Twin Cities as a teaching artist and actor. She was last seen in Theater Mu’s Production of Fast Company at the Guthrie and has been very active in youth enrichment and engagement. She studied at The Gaiety School for Acting in Dublin Ireland and has a BA from Lawrence University in Theater Arts. She is extremely grateful to be a part of this experience!

Although her parents would attest that she came into the world being dramatic, Cate first acted at school in northern England, before running away to make advertisements across Europe, Asia, and Africa. Her work as a company member at VRT builds on previous Vashon performances including “Kissing the Joy” at VCA, “The Odd Couple – Female Version”, “All in the Timing” and “The Normal Heart” for Drama Dock, Take a Stand’s “The Vagina Monologues”, Vashon Readers Theatre, Peter Serko’s “OUT” and the Vashon 14/48 festival. When not on the stage, Cate spends her days at her kitchen table concocting partnerships that create social impact around the world.

the University of Minnesota/Guthrie Theatre.

Paul is a former Vashonite, having developed Vashon’s “Shakespeare in the Parks”, and most recently seen in Brian Doyle’s “Kissing the Joy as it Flies.” In Seattle, Paul has performed at ACT, the Bathhouse, Empty Space, among others. He is a former Clown with Ringling Bros and Barnum and Bailey Circus and recipient of the Winifred Ward Award from the American Theater Association. He has performed in over 100 TV commercials and a dozen movies.

Michael has been involved in some sort of stage performance during each phase of his life. He enjoyed fronting rock-and-roll bands in his long lost youth, moved on to singing classical music, and is grateful for the opportunity to work with a host of mighty fine theater folks (again). He played Hysterium in Tacoma Musical Playhouse’s “Forum,” and has been in numerous island productions, including “Becky’s New Car” (Walter), “33 Variations” (Schindler), and a chimp named Kafka in “All in the Timing.” A bow of thanks to Charlotte Tiencken, and the cast and crew who make it all happen.

Yuto is currently a second-year student at Pierce College in Washington, planning to transfer to a four-year university. He participated in the theatre program as a student at AIE International High School in Japan. Yuto came to the U.S. in 2019 and joined the NPA/AIE drama’s production, “Seven Cars at Boston Harbor Marina,” directed by Bryan Willis. This is his second summer with the NPA/AIE program. It was a great honor to be involved in this radio play with the wonderful casts. He would also like to thank Charlotte Tiencken and Bryan Willis for this opportunity that opened his eyes.