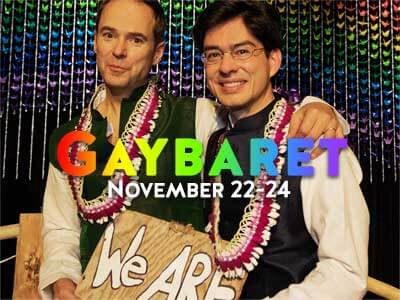 Last year, for their wedding, David Mielke and Thomas Hitoshi Pruiksma offered their guests an original performance that they called a “Gaybaret.” They wanted not only to share their stories—and the story of how they met—but also to delve into the deeper and more universal aspects of those stories, using a cabaret form that combined storytelling, original songs, and theatrical magic.

What emerged was an unusual and moving exploration of how friends and teachers help us to be ready to meet and say yes to a life-partner—gay, straight, or otherwise. Come be part of the public premiere of this inspiring and innovative show, newly revised into a free-standing performance that David and Tom plan to take on the road. Expanded and developed with support from 4Culture and presented in collaboration with Vashon Center for the Arts and the Vashon Heritage Museum exhibit “In and Out: Being LGBTQ on Vashon Island,” Gaybaret promises to be a singular theatrical event.

The weekend of performances will also be preceded by a special historical panel, “Prelude to a Gaybaret: A Historical Panel on the Art of Transformation,” at 7:30pm on Thursday, November 21, 2019.

David Mielke was born in Campbell River, BC, where an extraordinary teacher named Marie Rackham helped him turn his life around when he dropped back into high school after running away from home at the age of 15. He went on to work in Los Angeles as an actor, both appearing in film and television and creating and performing one-person shows under the banner of his company, The Rainbow Man Productions. His original works include Rediscovering the River and Spirit of the Unicorn. When Marie was diagnosed with cancer, David returned to Canada to care for her, and together they created the Cozy Grammar series of video courses as a way for her to be, as she put it, “where cancer isn’t.” After her death, he worked in LGBTQ social services before returning to working as an actor, producing additional content for Cozy Grammar, and creating and performing his own shows.

Thomas Hitoshi Pruiksma was born in Seattle and has lived and worked in Tamil Nadu, India, and Oaxaca, Mexico. His book of poems, The Safety of Edges, was published in February by Marrowstone Press. Other titles include Give, Eat, and Live: Poems of Avvaiyar and Body and Earth: Notes from a Conversation (with the artist C.F. John). Tom also performs original work regionally and beyond, combining poetry, story, magic, and song in talks and presentations for the young and old alike. His solo show, A Thousand Thanks: The Gift of Sadako and Her Cranes, had its premiere in October 2018 at VCA. He serves as Language Consultant for Cozy Grammar and has been the recipient of grants and fellowships from the National Endowment for the Arts, 4Culture, Artist Trust, the Squaw Valley Community of Writers, the U.S. Fulbright Program, the American Literary Translators Association, Ohio State University, Oberlin Shansi, and Oberlin College.

As part of the show’s public premiere, Vashon Center for the Arts, the Vashon Heritage Museum exhibit “In and Out: Being LGBTQ on Vashon Island,” and 4Culture are pleased to sponsor a special panel that sets Gaybaret’s themes of hidden shame, mentoring, and marriage in a wider set of perspectives. We’ve asked five distinguished panelists of different ages, backgrounds, and walks of life to share stories and reflections in response to the question of how we transform into our truest selves. How does art help us know ourselves more fully? How can rituals like a ceremony of marriage or theater itself offer the possibility of healing? How do we make sense of historical change as we experience it in our own lives, acknowledging both the blessings and the curses of the past?  >Find Out More