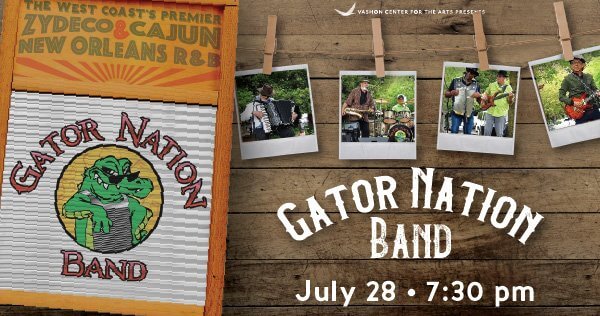 Gator Nation, the West Coast’s premiere Cajun, Zydeco, and New Orleans R&B band, is a hand-clapping, foot-stomping, high energy concert and dance band. We’ll be clearing out space for dancing at Kay White Hall, so be sure to wear some comfy shoes for their Vashon Island debut!

With the same survival instinct as its namesake, Gator Nation continues to adapt itself to its audiences, always with something fresh yet true to its calling. That calling is to represent the music of South Louisiana in all its forms, Cajun, Zydeco, and New Orleans style. They have the talent and diversity to do so, to express the nuances that define the genres.  The result is a remarkable show with so much variety and depth that at the end of the show, the Gator Nation Band leaves you happy and hollerin’ “Gimme Some Mo”!