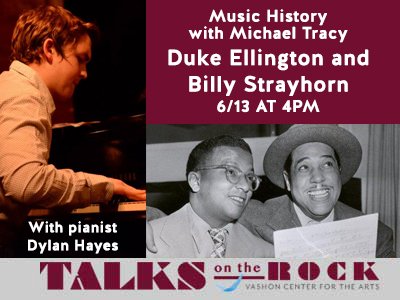 In the 1920s out of segregated Washington DC, a self-taught Afro-American pianist, composer and band leader, Edward Kennedy Ellington, embarked on a career that would last into the 1970s. By the late 1920s Duke Ellington was performing in Manhattan’s Cotton Club, by the 1930s playing to sold out crowds in Paris, London, and cities throughout the US. In 1938 Ellington met a 23 year old, gay Afro-American musical prodigy, Billy Strayhorn. For the next 30 years Ellington and Strayhorn formed Jazz’s great partnership producing such great songs as “Take the A Train”, “Lush Life” and many other famous hits.

Dylan Hayes is a top jazz musician based in the Seattle and the SF Bay Area. He is the leader of the Jim Knapp Orchestra, DX-Tet, and Dylan Hayes Electric Band. Dylan’s debut record “Songs For Rooms And People” was released on Blujazz Productions on March 2020. His debut record was named one of the top ten jazz albums of 2020 by The Seattle Times.

Stanley Ruvinov is a bassist and musician from Bellevue, Washington. He was born into a life of music, beginning his studies on the cello at age 7. In his teenage years, he found a love of the bass, and began his contrabass studies, shortly discovering the art of jazz. Stanley earned a Baccalaureate Degree in Jazz Studies and Performance from Michigan State University the same year, studying with renown bassist Rodney Whitaker. Stanley has been playing professionally around the Greater Seattle area since age 15 in such recognized venues as Tula’s and the Royal Room. He is currently working towards his Masters in Music at Temple University in Philadelphia.

Xavier Lecouturier is an American drummer and composer with French and Mexican heritage. A recent graduate of the Cornish College of the Arts Music Department, Xavier has been performing with his quintet, “DX-Tet” and with his close musical cohort Dylan Hares throughout his college years. As a composer Xavier encompasses various influences and styles: classical music, latin jazz, Mexican pop-rock, and American pop – a unique musician who brings something new to the tradition of jazz and modern music.

This event will have in-person seating for a limited capacity in the Kay White Hall.
It will also be Live-streamed on the VCA website and YouTube page.