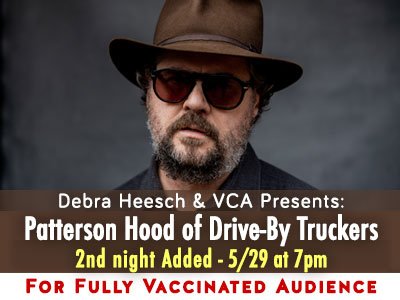 This event is for fully vaccinated patrons only.

We will be operating at 50% capacity which is 150 seats. Masks will be required but there will be no social distancing enforced. A photo ID and a vaccination card (or photo of card) showing a second shot on or before May 15 are required for entry into the VCA Atrium and Kay White Hall.

VCA would like to thank the Medical Reserve Corps and VashonBePrepared for consulting with us on protocol and safety.

Patterson Hood is a prolific writer and performer whose character-driven stories are packed with political subtext. He is best known as front-man, singer, songwriter and guitar player for the critically acclaimed rock and roll band Drive-By Truckers, but is also a writer of essays, columns and short stories as well as a solo performer and producer.

In addition to his work with Drive-By Truckers, Patterson has amassed three solo albums and co-produced or played on additional albums by Jerry Joseph, Bettye LaVette, Booker T. Jones and The Dexateens. As a speaker and lecturer, he has spoken and conducted classes at Princeton, The University of Indiana, The University of Georgia, and The University of Alabama. In 2015, he spoke at the Frank and Kula Lumpuris Distinguished Lecture Series at the William J. Clinton Presidential Center in Little Rock, Arkansas, and also delivered the commencement address to the graduating class of 2015 at the University of Northern Alabama.

Alabama is near to Hood’s heart, being born in Florence and raised in the Muscle Shoals area. He attended The University of Northern Alabama before he moved to Athens, Georgia where he lived for twenty-one years. Athens is the home base for Drive-By Truckers. Every year they play a sold out three-night stand at the legendary 40 Watt Club that is known as HeAthen’s Homecoming. Part of those proceeds go to the suicide prevention non-profit Nuci’s Space which Hood and his wife Rebecca have been very involved with for 20 years.