“Conservation Canines: How Dogs Work for the Environment” with Isabelle Groc 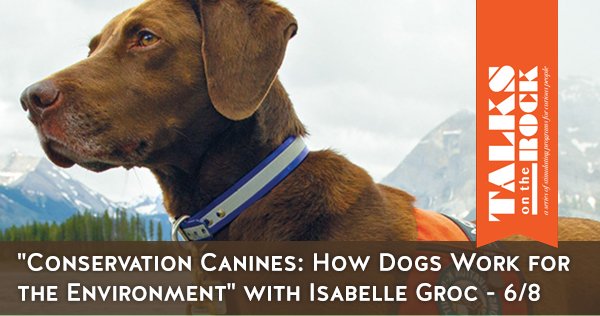 BC-based writer, conservation photographer, filmmaker and author, Isabelle Groc joins us to share about her book, Conservation Canines: How Dogs Work for the Environment, which highlights the human-animal bond and discusses how dogs are lending their paws and noses to fix some of the most complex environmental problems on the planet. The lecture will be in the Kay White Hall Theater, followed by a K9 demo in the Heron Meadow by Heath Smith and Jennifer Hartman from Rogue Detection Teams. Isabelle will then sign copies of her book in the VCA Atrium.

Conservation Canines features photographs of working canines, many of them former shelter dogs that will be sure to attract pet owners who are looking for new ways to understand and work with their dogs. Conservation Canines has been chosen as a Junior Library Guild Gold Standard selection and the book has received a starred review from the American Library Association’s Booklist, and highly recommended reviews from the Canadian Review of Materials and the School Library Journal.

Groc’s previous award-winning books, Gone is Gone: Wildlife Under Threat and Sea Otters: A Survival Story have gained the support of Jane Goodall and Dame Judi Dench, and her documentaries and photographs have been featured in film festivals, magazines and news stories all over the world.

Some of the stories included in the lecture will be:

Live in the Theater and Livestream on the VCA website

The K9 Demo will not be part of the Livestream