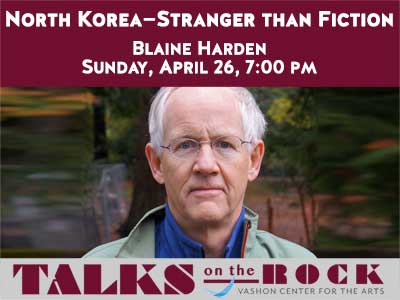 Blaine Harden is the author of a trilogy of highly praised books about North Korea: Escape from Camp 14, The Great Leader and the Fighter Pilot, and most recently King of Spies, which has been described as “a thrilling and jaw-droppingly good story of intrigue, daring, and depravity.” Harden is a veteran journalist whose 28 years as a correspondent for The Washington Post and his expertise on North Korea have made him a sought-after contributor to programs like PBS’ Frontline and many national and international publications. He will bring us up to date on the books’ characters, like Shin Dong-hyuk, the only person born in a North Korean prison camp to escape to the West, and share his views on the current relations between the Kim Jong Un regime and the U.S. Government.