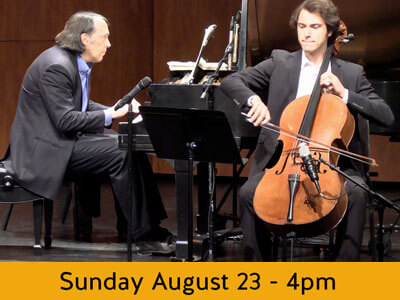 VCA welcomes back the Salman family in an all Beethoven concert. Mark Salman will perform two Beethoven piano sonatas: The Waldstein and the Appassionata. Jonathan Salman will join his father to perform Beethoven’s 3rd Cello Sonata, Op 69.

This year 2020 marks Beethoven’s 250 birthday, so throughout the year VCA is presenting various works of Beethoven in our classical music series. In June VCA live streamed the first of two Beethoven lectures covering his early years up 1770-1803 with Michael Tracy, lecturer along with Mark and Jonathan Salman performing live.

The three works presented on Sunday, August 23rd at 4 pm were written at during Beethoven’s middle period when already in his mid-thirties he grappled with a new devastating reality. Though already by his early 30s Beethoven was considered the most important composer of the early 19th century, this fame and recognition were at risk with his near total deafness. Yet as heard by these three monumental works, Beethoven overcame the greatest obstacle any musician could face.

As 2020 has made our own world full of new obstacles and harsh realities, we can take inspiration in Beethoven’s perseverance and love of his art that allowed him to not only overcome deafness, but create some of the greatest music works ever written. Though his music faces straight on life’s obstacles, trials, and losses, Beethoven answers with honesty, hope and sonic beauty.