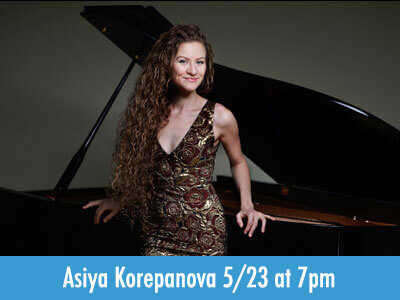 Russian-American concert pianist, composer, transcriber, artist, and poet Asiya Korepanova will debut a multi-camera video concert on the VCA website, followed by a live Q&A with her over Zoom.

Asiya was schedule to play the Kay White Hall on May 2, but due to the Coronavirus and thanks to her ingenuity and technical prowess, she is filming the complete concert from her home in Boston which we will debut on our website at 7pm on May 23nd. The video will be followed by a live Q&A with Asiya over Zoom!

We are offering both experiences with a suggested donation of $10 or more. If you would like to participate in the Q&A session, please register here:

Register for the Q&A

Asiya Korepanova is a pianistic powerhouse and rapidly rising star, recognized not only for her achievements as a pianist, but also for her work as a transcriber, composer, visual artist, and poet. Her solo piano transcription of Richard Strauss’ “Ein Heldenleben” and that of Rachmaninoff’s Cello Sonata have given her a place among today’s formidable transcribers.

Asiya was born in Izhevsk, Russia, to a musical family. She began to learn piano from her mother when she was 4 years. She was taught to read music in orchestral clefs by her father, an exemplary composer, at the age of 6, and started composing her own music. At 9, she made her orchestral debut, playing Mozart’s Concerto No.8 with her own cadenza, and also performed her first solo recital under the auspices of the philharmonic society.

Ms. Korepanova received many awards throughout her formative years in Russia, including the Russian Federation’s Presidential Award for “Exceptional Achievement in the Arts”; the National Award from the Republic of Udmurtia (2002); Germany’s Berliner Salon Award (2003); Russia’s Youth Triumph Award (2005); the title of ‘Honored Artist of Udmurtia’ (2009); and was made an artist of the Moscow Philharmonic Society in 2009.

In 2012, Asiya moved to the United States at the invitation of renowned pianist, Santiago Rodriguez. Later that year, she was awarded the Gold Medal at the Nina Wideman International Piano Competition, which proved invaluable in the establishment of her concertizing career in the U.S. She has continued to garner national attention with performances at the Stern Auditorium at Carnegie Hall, the Bargemusic Series, the Phillips Collection, the Dame Myra Hess Memorial Series, the International Miami Piano Festival, and countless others. Ms. Korepanova has been featured on CNN, NPR stations, WFMT, and WETA.

Saturday, May 23 | 7pm
The live-stream will be on our homepage
$10 or more suggested donation