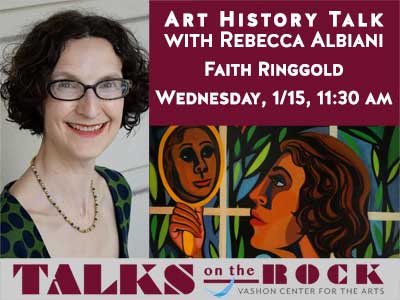 Rebecca Albiani will offer her latest Art History Talk on Faith Ringgold on Wednesday, January 15. Still an active artist at 89, Faith Ringgold was born in Depression-era Harlem, with its vibrant arts scene.  She supported her family by teaching art in the public schools as she honed her artistic vision, which began to dovetail with her political philosophy during the Civil Rights Movement.  As she said later about her American People Series, “I couldn’t paint landscapes in the 1960s – there was too much going on.”  So her oil paintings from this era, such as American People Series #20: Die, took on hot-button issues like race and violence. By the end of the 1960s, Ringgold was also deeply involved in the Women’s Movement as well, and she worked as an activist to promote greater equality in the art world and society as a whole.

In the 1970s Ringgold began to explore textiles, traditionally considered a “female” medium, and made fabric wall hangings, masks and sculptures.  In 1980 she completed the first of the quilts she has become best known for.  Her story quilts combine sewing, painting, and text to create works of art that resonate on many levels, from the deeply personal to the universal. Her quilt Woman on a Bridge #1 of 5: Tar Beach from 1988 was recently named one of the ten most popular objects in the Guggenheim’s online collection; she adapted the image into a children’s book, Tar Beach, which gave her an even wider audience.

Ms. Albiani graduated with highest honors in Italian and Art History from UC Berkeley.  She never quite finished her doctoral dissertation on 16th Century Venetian painting at Stanford, but while a graduate student she was granted a Fulbright Scholarship for research in Venice and a Graduate Lecturing Scholarship at the National Gallery of Art in Washington, DC.  For the last 15 years or so she given the monthly Art History Lecture Series at the Frye Art Museum, where her topics have ranged from ancient Egypt to Pop Art.

All Seating is unreserved general admission.