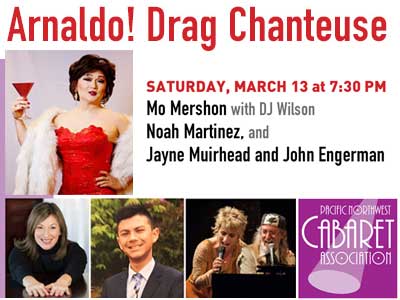 Arnaldo! returns to the Kay White Hall to host two evenings of cabaret. On March 13th Arnaldo! will be joined by Mo Mershon, Noah Martinez, and Jayn Muirhead and John Engerman.

> Find out more about the March 27 performance.

Founder of Pacific Northwest Cabaret Association and Executive Producer of March is Cabaret Month, Arnaldo! Drag Chanteuse has performed his cabaret act as a classic cabaret chanteuse nationally and internationally. Arnaldo! has been honored with a New York Bistro award, a Gawad Musika award for Most Innovative Concert Artist in Manila and a Bayanihan Award from the Filipino Community of Seattle. Arnaldo! is thrilled to see the growing community of musical cabaret artists and grateful to all those who are helping to keep cabaret alive.

Thrilled to be a part of this PNW Cabaret fundraiser, Mo Mershon has worked on stage since the age of 8 and is a proud member of the professional actor’s union, Actor’s Equity Association. She has performed all over the United States in many cabaret performances, musicals and plays. Mo has taught acting, cabaret performance and musical theatre classes and currently writes, directs and produces musicals and plays. She is joined by the incomparable DJ Wilson on the piano. Mo and DJ have worked together over many years and still enjoy each other’s company.

Francis Noah Martinez is currently a sophomore at Seattle Preparatory School and started playing the piano at the age of 7. Under the guidance of of Dr. Ross Salvosa, Noah has won multiple awards in piano festivals including: Gold Medal-Seattle International Piano Festival 2020, Gold Medal- Northwest Chopin 2020, and Pacific International Piano Festival 2020. This will be his cabaret debut and Noah dedicates this performance to his #1 fan- great grandmother NENA Inocentes for believing in him and tirelessly shares her golden words of wisdom.

Jayne Muirhead and John Engerman have been working together longer than they have been married. And they’ve been married 30 years! Their collaboration includes four one-woman shows at the legendary Cabaret de Paris, a full length musical at ACT’s Songworks program, and numerous house concerts in Paris, France. When they’re not working together, John is busily working on original musicals, and Jayne is trying to get another job onstage, where she has performed in over 70 shows in Seattle and beyond. This year’s show will feature a combination of John’s songs from musicals and cabaret shows.

Your donation will help support this and future broadcasts. Thank you!