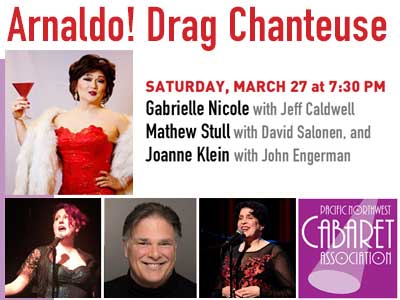 On March 27th Arnaldo! will be joined by Gabrielle Nicole, Mathew Stull, and Joanne Klein.

Founder of Pacific Northwest Cabaret Association and Executive Producer of March is Cabaret Month, Arnaldo! Drag Chanteuse has performed his cabaret act as a classic cabaret chanteuse nationally and internationally. Arnaldo! has been honored with a New York Bistro award, a Gawad Musika award for Most Innovative Concert Artist in Manila and a Bayanihan Award from the Filipino Community of Seattle. Arnaldo! is thrilled to see the growing community of musical cabaret artists and grateful to all those who are helping to keep cabaret alive.

Gabrielle Nicole is Seattle’s Sweet-n-Sour Sensation. Her thought-provoking productions have graced stages coast-to-coast, from NYC to Seattle’s own Jewelbox Theatre, Julia’s on Broadway, and Egan’s Jam House. Gabrielle has been dazzling the cabaret scene for over three years now, in addition to performing burlesque as Miss Pixie Rose. With her silly antics and soaring soprano, you are likely to experience side-stretching laughter to tear-jerkers and everything in between. You never know what will come out of her mouth next.

Matthew Stull is a trained actor, voice talent, singer, and founding member of The Bobs, a Grammy-nominated a cappella vocal group with an international following. As a member of The Bobs, Matthew performed with an astounding variety of acts, including Frank Zappa, the Grateful Dead, Robin Williams, Billy Crystal, and Ray Charles. He performed at the Emmy Awards, the Oscars, the Tonight Show, and PBS specials, and contributed to the soundtracks for both television and major motion pictures. The Bobs were the voice talent on one of the first interactive video game platforms for Microsoft.

Ms. Joanne Klein has performed as and actor and singer all over the Northwest as well as California, Costa Rica, Paris, Canada and Scotland. Her singing includes musical theatre, cabarets, concerts, jazz, saloons, and any place that will hire her. She is witty, dramatic, silly, and experienced. Joanne teaches acting and coaches singers and loves entertaining audiences of all ages, performing in the smallest venues to the largest professional stages and now streaming! Surely the live spaces will happen again, Art Saves Lives…til then, just keep singing.

This event will have in-person seating for a limited capacity in the Kay White Hall. It will also be Livestreamed on the VCA website and Facebook page.

Tickets must be purchased 48 hours prior to start time
to allow for seat mapping.