An Evening with George Winston 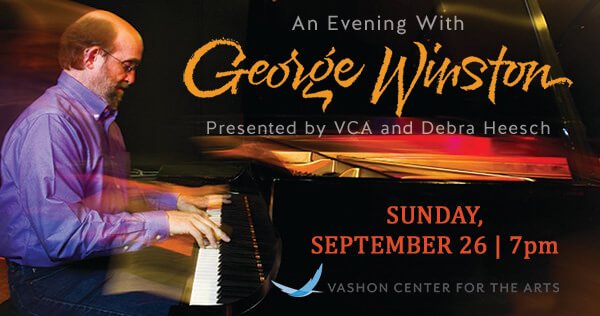 Vashon Center for the Arts and Debra Heesch cannot wait to welcome the celebrated solo pianist George Winston to the Kay White Hall for an intimate evening of solo piano on September 26.

George Winston is undeniably a household name. He’s inspired fans and musicians alike with his singular solo acoustic piano songs for more than 40 years while selling 15 million albums. A tireless road warrior playing nearly 100 concerts annually, live performance for Winston is akin to breathing. Winston’s music is evocative, offering us all a chance to take a step back from our perpetually busy lives and let our minds adventurously wander. Restless Wind is a portrayal of Winston’s place in a chaotic world – his compositions extend solace with an idiosyncratic grace.

George Winston’s classic albums, Autumn and December, are perennial favorites, along with Winter into Spring, Summer, 2017’s Spring Carousel – A Cancer Research Benefit, as well as two volumes of the compositions of Vince Guaraldi, two volumes of benefit albums for the Gulf Coast disasters, and six other solo piano albums. He just released his 15th solo piano album, Restless Wind, via Dancing Cat Records/RCA Records. The new album and all of George’s records are available at GeorgeWinston.com.

100% of merchandise sales will be donated to the Vashon Foodbank. There will also be a collection station at VCA that evening for non-perishable food donations.