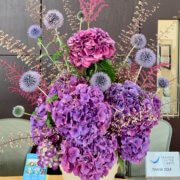 Let’s begin our journey with a project that has been a full year in the making: Our first ever Broadway Boot Camp with amazing instructors Orlando Morales and Nikki Long from Seattle’s 5th Avenue Theatre. They’re working with a talented group of 18 students on the stage this week with an emphasis on “developing healthy habits for empowering performances.” 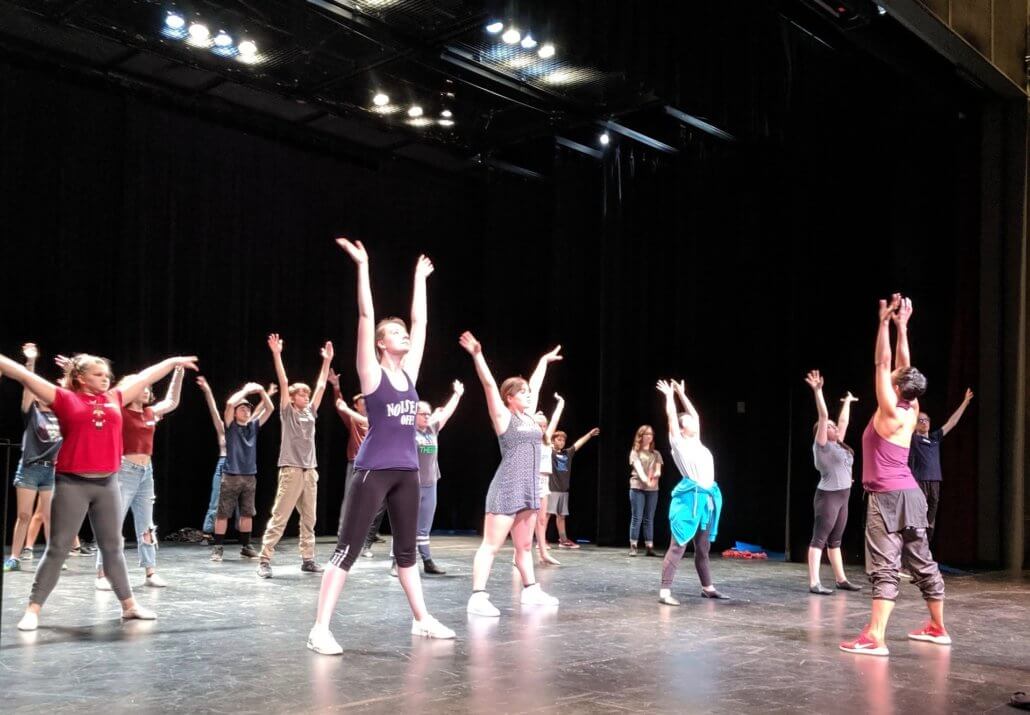 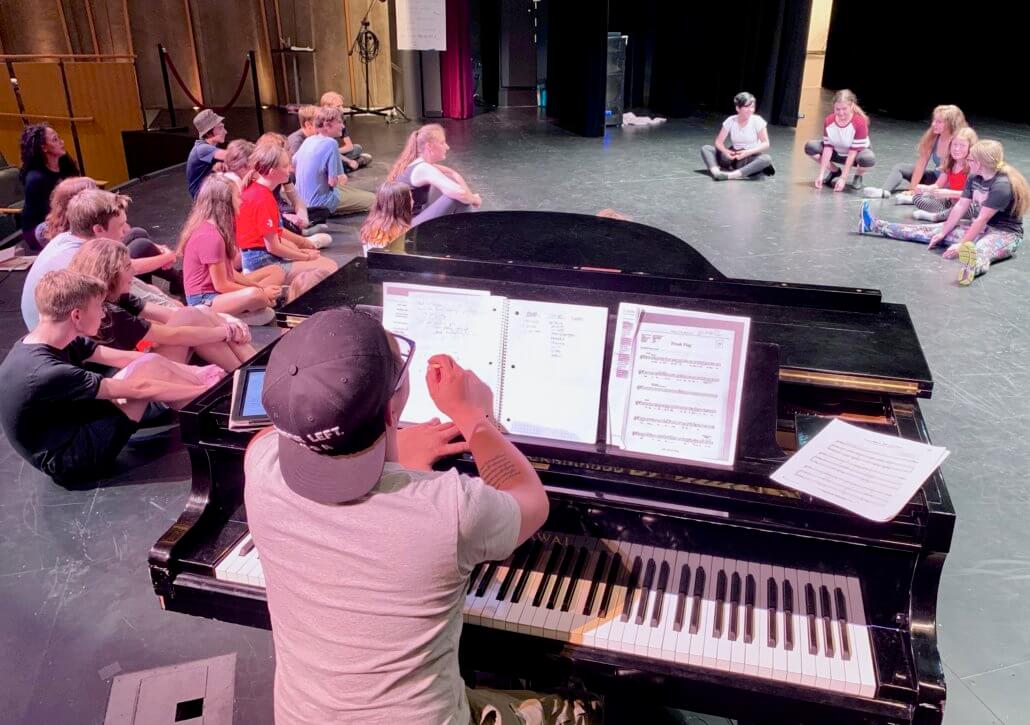 Students have spent the week in daily skills-building classes, including proper techniques for vocal health and body alignment as well as audition and performance skills.

If you don’t already know, the 5th Avenue Theatre is the largest musical theatre producing house in the region. The good folks there have developed numerous shows that have gone on to Broadway and beyond.

The big payoff for the Boot Camp kids will be an informal presentation of their new chops for family and friends on Friday, Aug 2 at 3:00 PM.  The extra cool bonus is free admission to a workshop with Broadway actress and singer, Christine Andreas, next weekend.  More on Christine in a thrice.

Meanwhile, in the upstairs dance studio, our Vashon Center for Dance played host and Master Class home to Amanda Morgan of Pacific Northwest Ballet this week. If you guessed that our young dancers walked out of the class GLOWING after taking Amanda’s Ballet, Improv and Variations Classes, you would be right.

Amanda coached them on Kitri’s Variation from Act III of Don Quixote, guided them through Improvisation exercises, and left everyone encouraged and inspired. 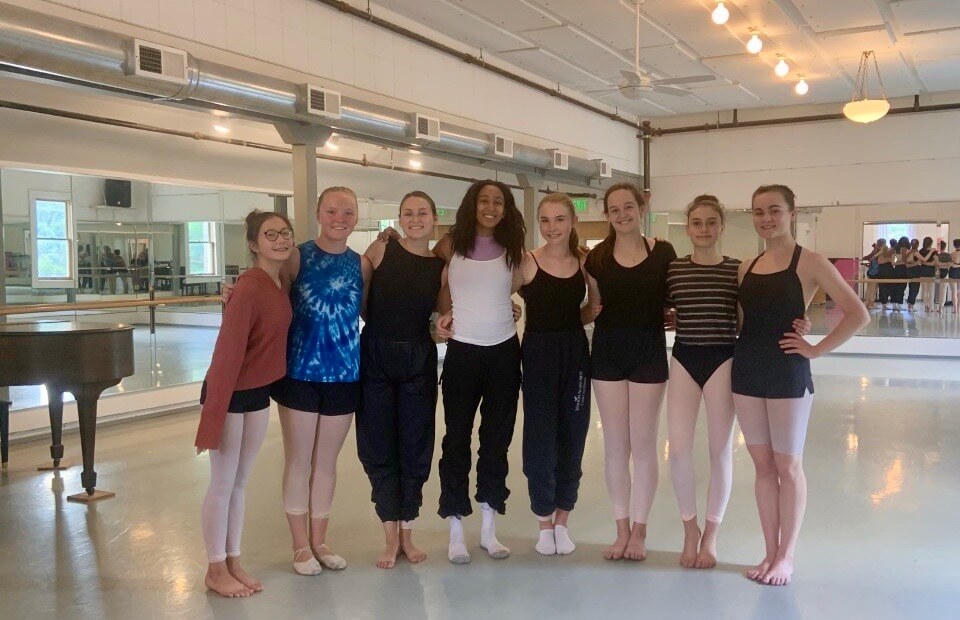 Keeping with the Broadway theme . . .

In case you can’t tell, I am LOOKING FORWARD to welcoming the superlative singer, Christine Andreas and her fabulously talented husband/accompanist/composer Marty Silvestri to our stage August 10th.  I have heard her, and all I can say, all I can do, is implore you to cancel your plans that night and come hear Christine SING.

I caught up with Christine and Marty via email and voice.

Me: Christine . . . say some things about your musical upbringing.  When did you start singing?  What was your training?  When did you know?

Christine:  think I sang in utero(she says laughing). I mean it!  My mom was a natural singer. Music was everywhere in the house. Mom was joyful and unselfconscious . . . she was lovely with sound. In the 6th grade, Sister Mary Joseph (with a wink) told mom she’d go to hell if I didn’t start voice lessons. So, off I went to Ms. Edna Wood, who was terrifying. But her accompanist, Bob Tartaglia was glorious, and the music poured out of me.

Me: How did you two find each other?  Say some things about working together.

Marty: In 1992, my writing partner Joel Higgins and I had just finished work on a new musical called the Fields of Ambrosia and we were doing two stage readings of it in New York with the full cast of 22 people.

We were looking for the female lead and Joel had worked with Christine. He was her Curly for a good portion of her run in Oklahoma at the Palace Theater. He said, “You know, it’d be great to have Christine Andreas for this part.”

I replied, “Ah, of course I know Christine. I’ve seen My Fair Lady and Oklahoma, but you know, they’re pretty standard scores.” And our score was a little more biting, a little more edgy. I started to question it and he just stopped me mid-sentence and said, “Marty, trust me, Christine Andreas can sing anything.”

And, truer words were never spoken as I found out in the 27 years since.

Needless to say, we met, she was fantastic. We ended up doing a production, the first production of the show in New Brunswick, New Jersey. And the incredible reviews and response to that production led us to the West End of London where The Fields of Ambrosia opened with Joel and Christine.

Me:  You both have been “in the business” for many years.  What would you say were some favorite moments?  Not necessarily awards, just moments you treasure.

Christine: As a young actor I was understandably very insecure in My Fair Lady, my first big Broadway show.

I could sing anything in the show, but the text was pure Bernard Shaw and I was a rather untrained actress at this point. My costar Ian Richardson was a Shavian scholar and even he was a little freaked out about being on Broadway and singing in the musical.

One particular performance while in previews . . . I really nailed the infamous “Slipper Scene” at top of the second act, and as I exited the stage, a ‘red carpet’ appeared in front of me leading all the way to my dressing room.

To this day I don’t know where Ian got that bolt of red material, but it was magical for this young actress to find herself so thoroughly appreciated by her very accomplished costar.

Marty: I think back in about 1982, I was asked to come in as basically a stand-in for Andrew Lloyd Webber when the producers were trying to put transformed the musical oratorio, Joseph and the Amazing Technicolor Dream Coat into a Broadway show. Andrew had no interest in what we were trying to do because he and Tim Rice had broken up their relationship and Andrew was busy working on CATS.

So, it fell on me to not only do the orchestrations and the musical supervision, but to also make some significant changes in the score.

For example, the narrator had always been a guy and there were no women in the production since it was a school boys oratorio back in London. I insisted we have some female voices, or it was going to sound kind of droll. And most importantly, I changed the narrator from male to female, found (Tony award winning) Laurie Beechman, changed the act ending and added some music at the beginning and wrote a new ending with Tim.

I still look back on that as one of the great moments. We started off-Broadway in New York at the Intermediate Theater downtown on Second Avenue, moved up to the Royale and never, never, ever thought it would grow into the show it has become. It is today being done all over the world. As a matter of fact, I think a production just opened in London, last week.

Me:  You’re coming to Vashon to perform you wildly popular Love is Good concert.  What can our guests look forward to?

Christine:Love is Good is our most personal show . . . It’s our life in music. And, since our life is an ongoing event (hopefully for a lot longer!), the show changes and keeps evolving. So, it stays fresh for us.

It seems people like knowing your story and appreciate hearing about the journey, particularly a “couples” journey.

When we first performed this show, apart from lovely comments on our performances, we were surprised that a great deal of comments were about us as a couple making music together…perhaps that’s why, in particular, it’s so ‘wildly’ popular.  And, you also hear some really gorgeous music, standards, showtunes, light pop, plus original tunes.

The Vashon Summer Arts Fest wheel keeps on turning . . . as I write, we continue to set sales records and when you come visit on August 2nd, you will have the chance to “ooh and ahh” over the work of 65 Vashon artists who have work showing in our galleries. 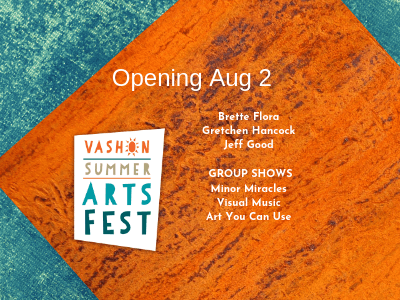 That’s a handsome number and the work is up to the task.

Echoing the “reverse ekphrasis” show Michael Elenko brought us in April, these photographers have chosen a piece of music and created an image inspired from it.

“Art You Can Use” is a collection of Fiber Artists Lisa Brown, Sharon Schoen, Sue Willingham and Patricia Wronsky. It’s stunning and you’ll love it all.

Surely there is no better thing to be able to announce that Our Flower Committee is Back! Dating myself, I am told we had such a thing sometime in the past.  Past is now present, and our public spaces are now weekly graced with breathtaking arrangements of fresh flowers courtesy of the hands and gardens of Anita Halstead, Cindy Stockett, Jil Stenn, Vicki Claybaugh, Sue Wiley, Marian Bischle and Mary O’Leary Bryant (with hauling and cartage provided by Kelly Robinson). 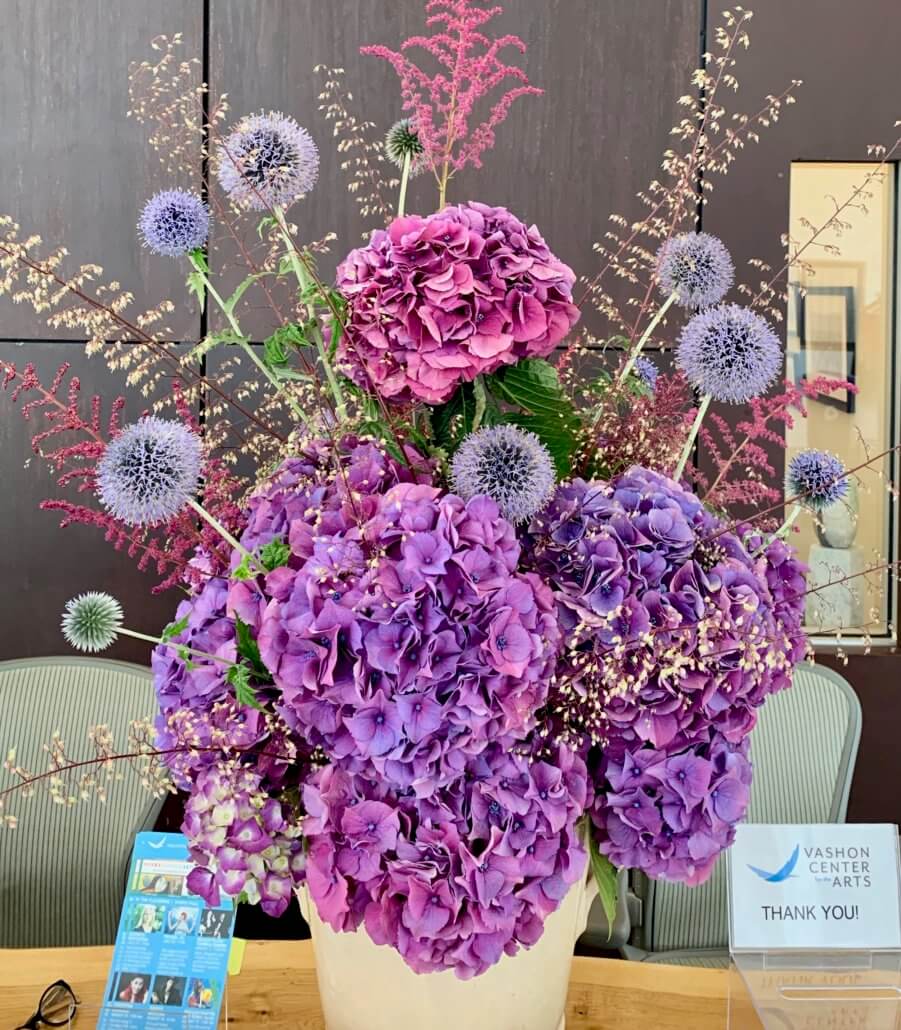 Another reason to come by VCA on any given Friday.

Where do these notions come from? In this case, and I am almost loathed to admit it, from Netflix.  Our latest guilty pleasure is binge-watching a series called Sense8 . . . which we are seemingly the last in our circle to have discovered.

Warning: What follows is one gigantic ear-wig.  You won’t get these songs out of your head.

The dramatic peak of one of the episodes turns on a song by 4 Non Blondes, which gives rise to this week’s offering . . . “Hey Songs,” starting with What’s Up by 4 Non Blondes.  Listen, you’ll get it.

Na Na Hey Hey Goodbye, written and recorded by studio musicians Garrett Scott, Dale Frashuer, and producer/writer Paul Leka at Mercury studios in New York City is a staple in nearly every sports arena in the country as the losing, visiting team is serenaded off the field.

This list would be tragically incomplete without Hey Good Lookin’, by Hank Williams . . . a song inspired by one of the same title by Cole Porter in 1942.

. . . and a fabulous cover by the Mavericks

And if you’re curious, here’s a nice cover of the Cole Porter version.

Eric Clapton weighs into my list with a song called, Hey Hey.  Listen and guess why.

Don’t hate me for posting this tune by the Monkeys.

The Friday Fish Wrap is edited, and mostly written, by Kevin Hoffberg. Why “Fish Wrap”? Years ago, living in San Francisco, I became a devotee of a legendary journalists named Herb Caen. While he may not have been the first to use the phrase in connection with “yesterday’s news,” he is the one I remember. Today’s news is tomorrow’s fish wrap. Maybe it’s a generational thing. At any rate, we call our Friday wrap up, The Friday Fish Wrap . . . Five things worth knowing about VCA this Friday.