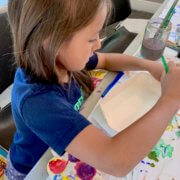 Our Blue Heron Education Center continues to be the happiest place on Vashon this summer with three great programs.

I’ve previously teased Frozen Jr., a delightful adaptation ofthe 2018 Broadway musical, our show features all of the memorable songs from the animated film, plus new songs written for the Broadway production.  You can put on a big smile on Friday at 7:00 PM when you attend the show. Tix are just $5.00. 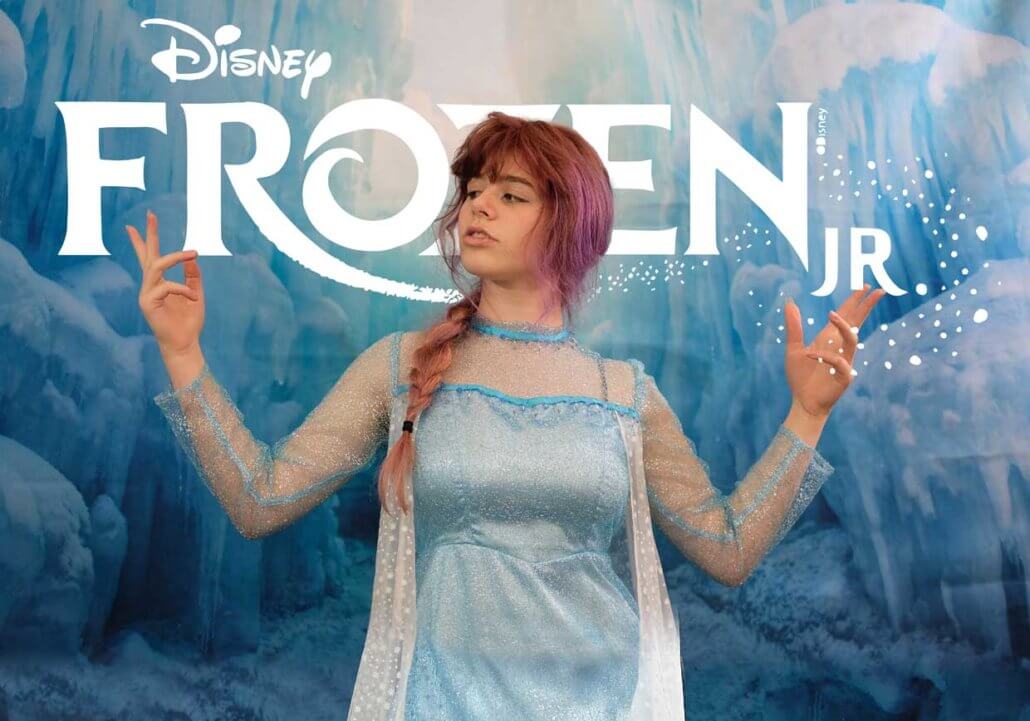 Meanwhile, the fabulous Magical Fairy Camp is in full swing, led by the irrepressible Caroline Rockey (is it possible she is secretly one herself?) 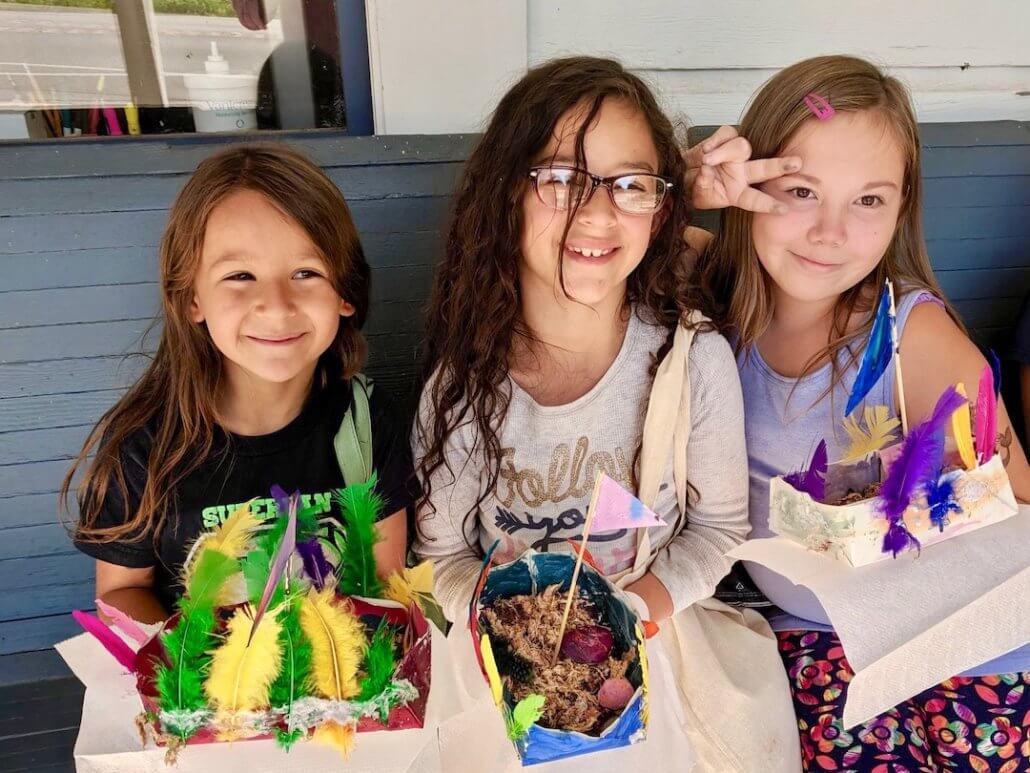 Don’t look now because you’ll wish you were part of the fun. Every day the young artists dive into a fairy tale from a different culture, then go on an artistic adventure…drawing, painting, sculpting and crafting your way into the imaginary worlds of the fairies. All week long they’ve been creating little houses and mystical landscapes, concocting fairy food and potions, weaving fairy crowns and making magic wands.

At the same time, Anna Sander and Molly Wilson are teaching a skill that all should know and too many have forgotten . . . the simple pleasure of a well-placed stitch. Their young charges are busy learning the basics in our Adventures in Sewing Class: hand stitching, pinning, ironing and using a sewing machine. Delightful tote bags with appliqué, pin cushions and small quilts in production as I write. We’ll get them started on custom shirts and couture next week. 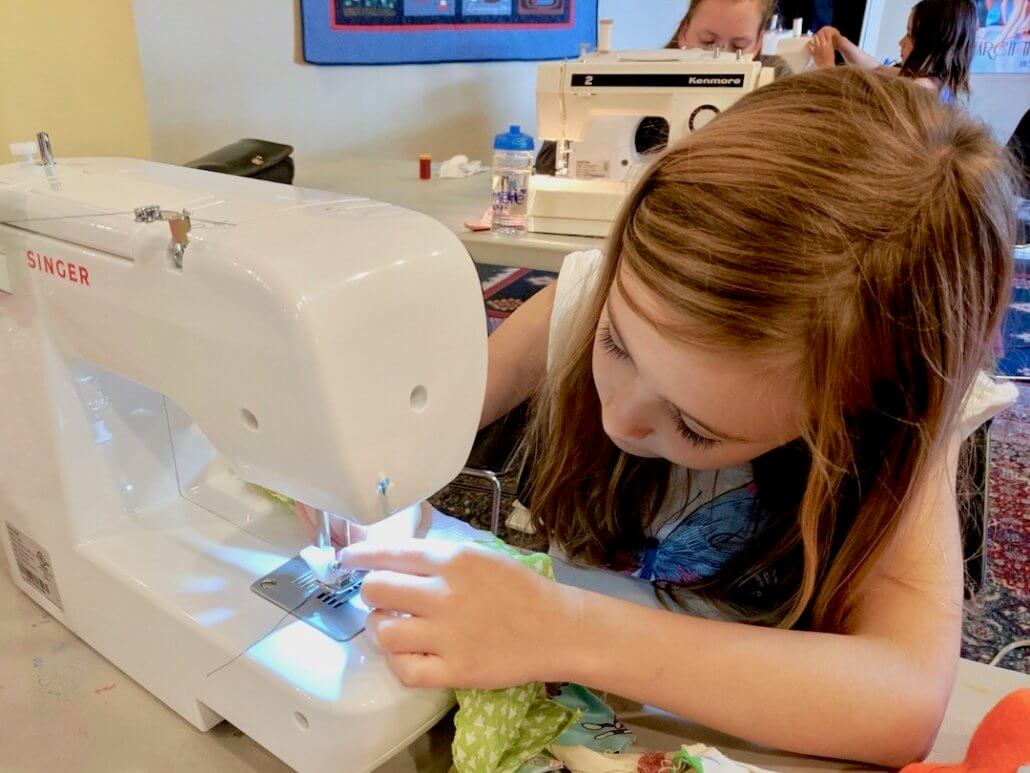 It’s not too late to sign up for super fun classes at the happiest place on Vashon. Click here to learn more.

Last year (and again this year), Mike Tracy thrilled island classical music audiences by launching a musical history lecture series that looked deeply into the work, influences, and musical linkages between a series of legendary composers. Best of all, he wove his narrative around live performances of signature works which took full flower when he introduced many of us for the first time to noted pianist Mark Salman.

For those who haven’t followed the back story, Mark is a magnificent talent and has garnered a slew of accolades. He began his studies at age eight and made his first recital debut at eleven. A graduate of The Julliard School, Mark also studied at MIT for two years concentrating on chamber music and composition. Mark recently released a recording of the late Schubert sonatas and “Chopin’s Intimate Art: The Mazurkas.”

It turns out Mark’s family is overflowing with serious musical talent, all of which (most of which?) will be on offer August 3rd, when Mark will join his sons pianist Benjamin Salman and cellist Jonathan Salman in a performance of works written for two pianos, cello and piano, four-hands (two pianist at one piano) as well as solo piano.

Here is an absolutely delightful version of Beethoven Cello Sonata D Major, Op.102 no. 2 which we’ll hear played by father and son Salman.

3 – The VSAF Wheel Keeps on Turning

It’s hard to believe we are in week four of our second ever Vashon Summer Arts Fest. I’ve said this now every week . . . you just have to come see for yourself. The works on display (and for sale!) are an awesome testimony to the wide and deep pool of artistic talent on our island.

As I hope you know by now, we change a portion of our galleries every week, and this week’s additions are delicious smorgasbord of how our island artists work and what they have to offer.  Come see:

“Relume” is a single four-foot handmade book that uses hand printed lithographs, screen prints, and etchings. It is absolutely stunning . . . truly one of the most remarkable pieces we’ve seen in our galleries in a long, long time. 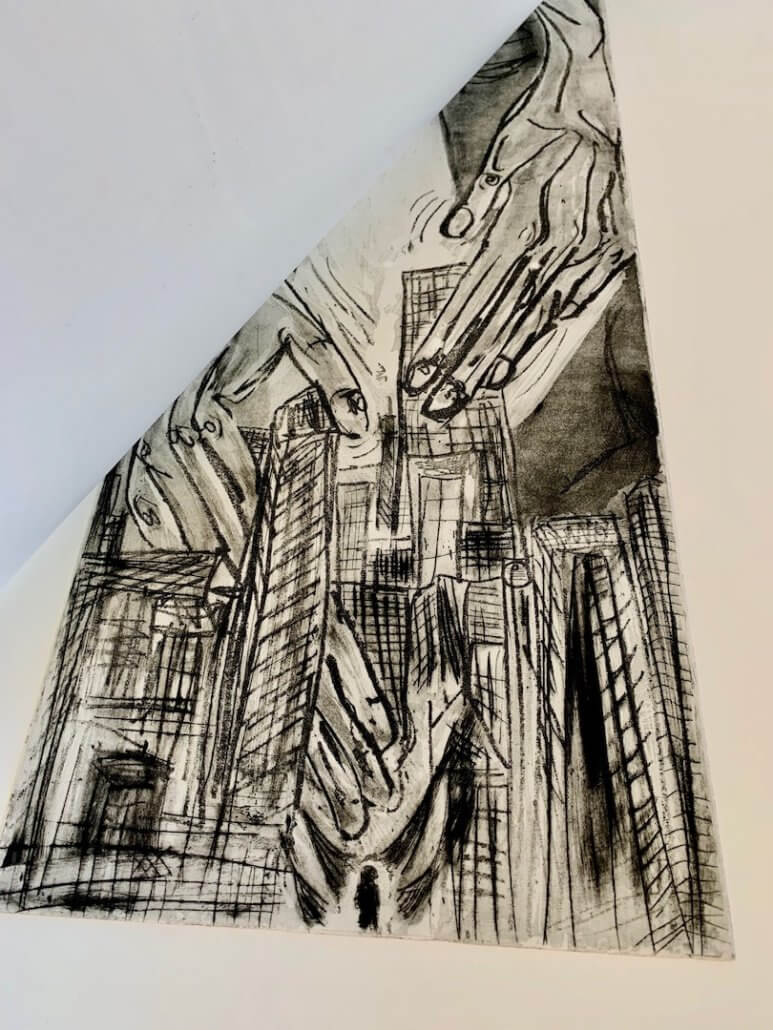 Kris Pedrin introduced himself to the island last year as a photographer worth collecting, and this year’s offers suggest nothing less.

For many of us, the Clay Community Group Show last year was a signature moment for our nascent Arts Festival, a joyful celebration of master works to the first public showing from some of our newest ceramicists.  This year’s show is just superb. 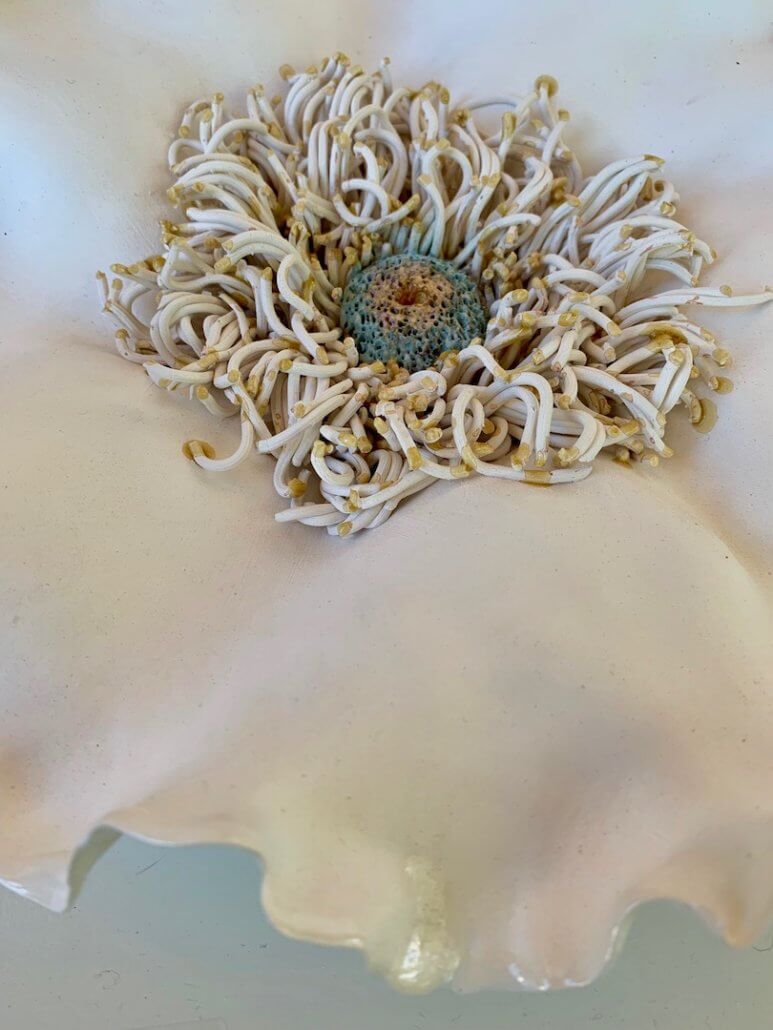 Waterworks Studio is a collective of over 25 artists who come together once a year at Darsie and Christine Beck’s studio for the VIVA Art Studio Tour. Waterworks will fill the VCA gift shop with the art and crafts of 15 of their artists working in every imaginable.

After the notice last week of the gift in Bruce Morser’s name, I thought it would be fun to circle back and ask him a few questions. 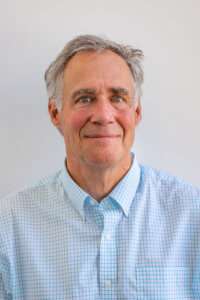 Me: Bruce, not everyone knows your origin story.  Say some things about what drew you into a career so firmly rooted in the arts?

Bruce: I was a slow reader when I was in elementary school – a text book dyslexic – seriously.  I quickly realized I communicated better with drawn imagery than written words (Fortunately I’ve always been able to talk up a storm as well).

Those images were always my passport to interesting educational opportunities – everything from getting over the hurdles of high school and into a good college, to my first employment as an Art Director, and eventually a multi-decade career as a freelance illustrator.  I liked art that revealed to me many aspects of how the world works, and I was driven to share that.

Me: You’re someone who seems to have woven together strands of commercial art, fine art, education, advocacy, and institution-building.  Say some things about what has motivated your interests and efforts.

Bruce: I think my goal in making any kind of art has always been an attempt to get people to pause by showing them something intriguing, that builds a strong feeling, that finally compels them to bring someone back to share it with.

Whether that’s the big wood installation in VCA, or an illustration for National Geographic, or even helping 4th graders paint birds, it’s almost always about engaging groups of people for me.

I’m also a very social person, the studio can get lonely, so volunteer work for community art organizations like VCA and teaching motivates me, and is just fun.

Me: You and I have had many conversations about the importance of art in our lives in general. What would you say to a young person about the arts?  Would you say anything different to us “more experienced” citizens?

Bruce: I teach a wide range of people how to draw as one form of art making. The young kids can’t wait to get started and fearlessly dive in. Older people are often too nervous to even begin, sensing impending judgment and certain failure.

Young people don’t need much help, just room and encouragement to go wild. As we get older it’s so important to keep the focus on the joyful process NOT on a final product.

I’ve had a number of students ask, “How good do I need to be to make art?”  Everyone is plenty good right now. The key is to really enjoy the process of what you’re making.  Skills, if you want them, will slowly develop over a lifetime.  Artistic joy can be immediate!

Me: I know you have some new projects.  Is there anything you’re working on that excites you more than others?

Bruce: Things are changing in the studio. I’m winding my illustration business down a bit so that there will be room for bigger, more fine art oriented, projects.

I’ve recently been awarded another large installation project, not unlike the one I made for VCA, which really excites me.  It’s a little too early to describe, but it’s all I can see when I close my eyes.

As always, I enjoy drawing portraits, especially of friends.  More than anything, I’m teaching more, which I love.  I’m compelled to help more people connect with their creative self.  Drawing is a great way to do that.

Today Vashon Nature Center took another big step towards tucking into their new meadow home – they call it the Heron Ecology Meadow – at VCA. 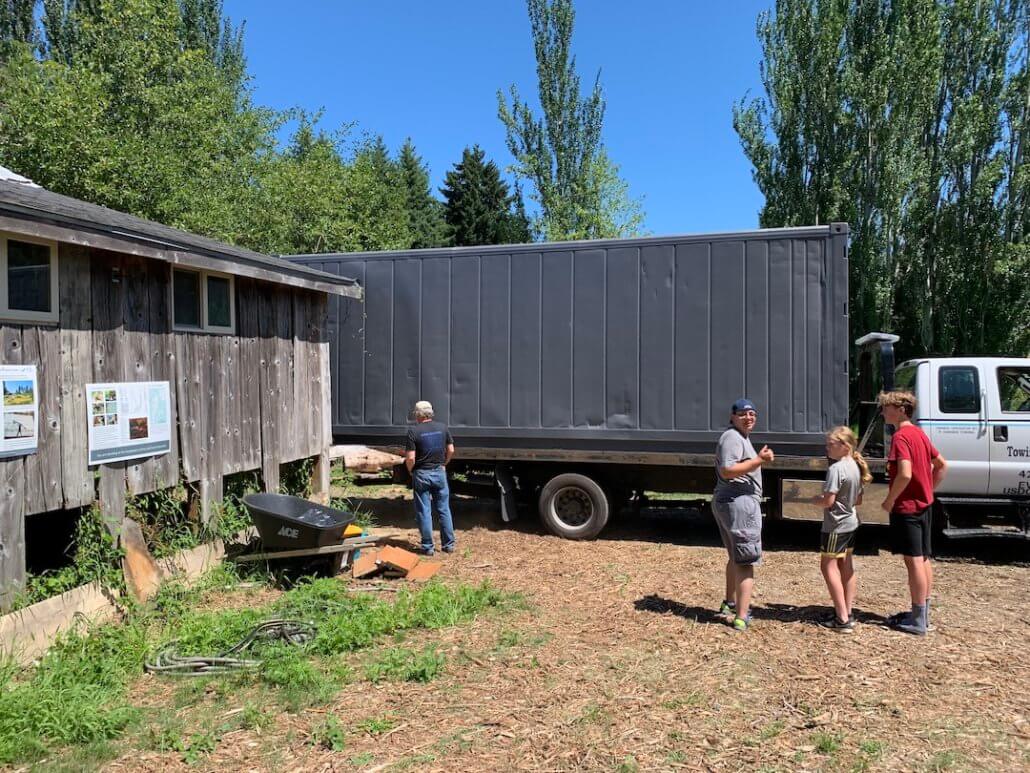 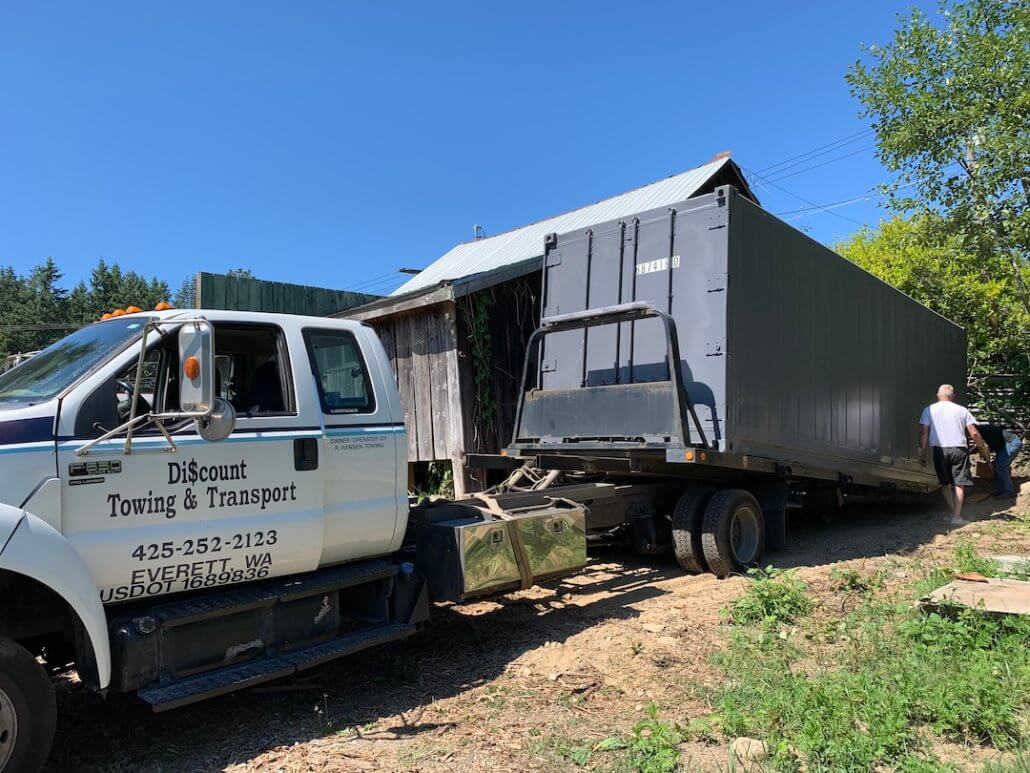 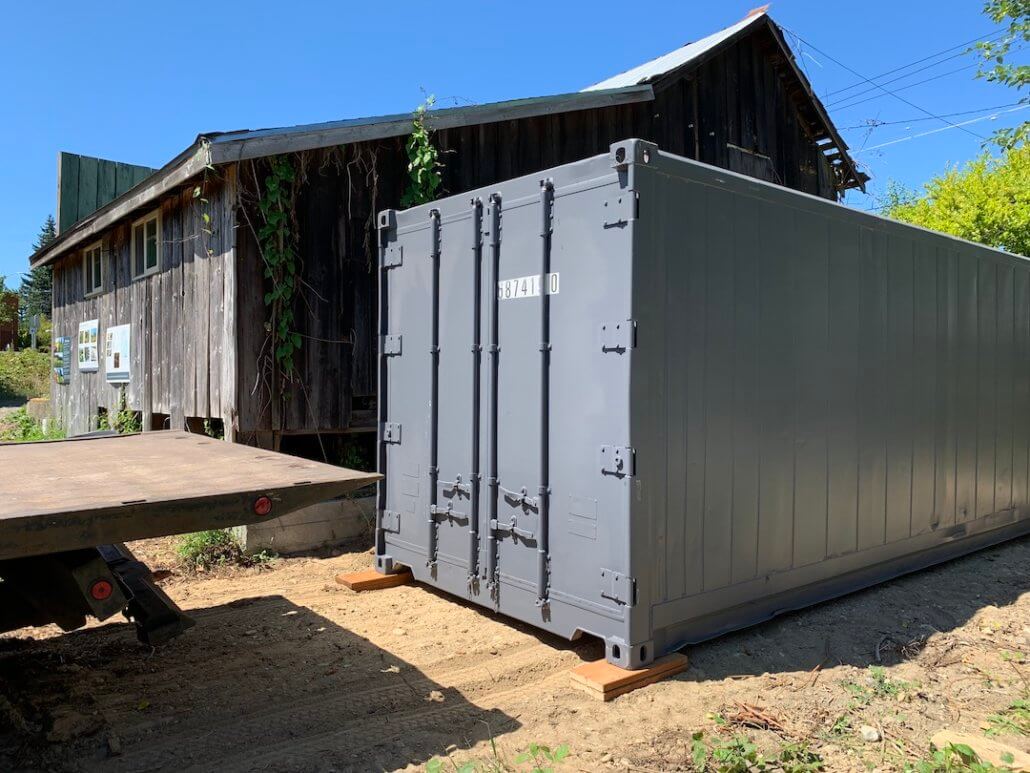 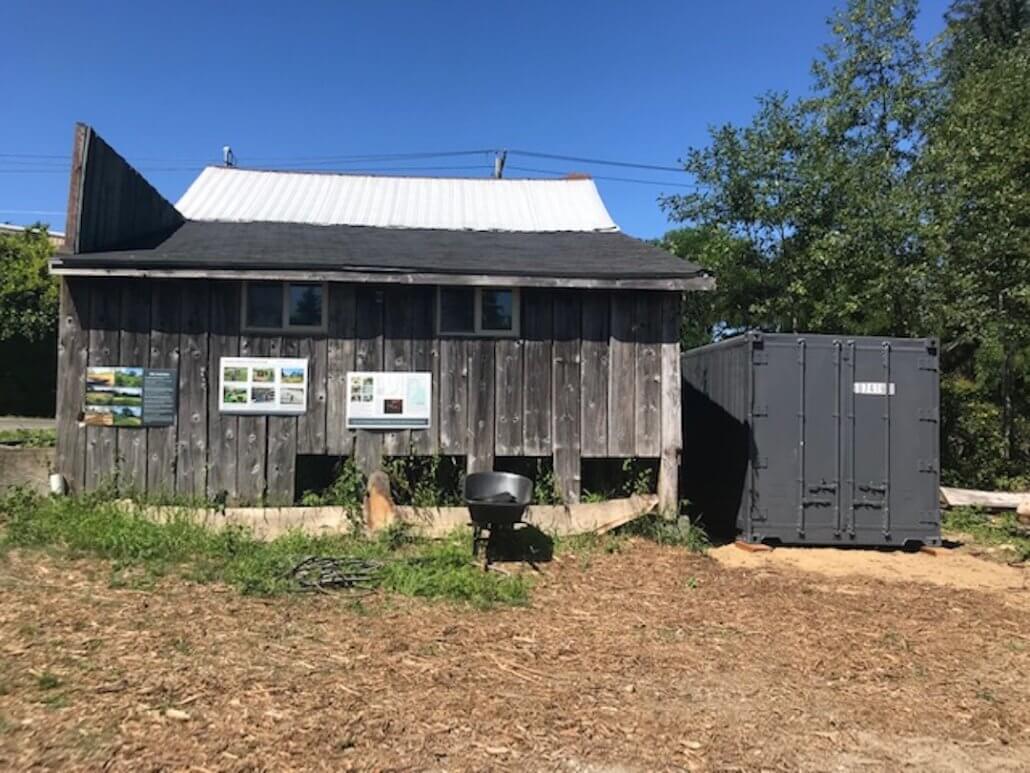 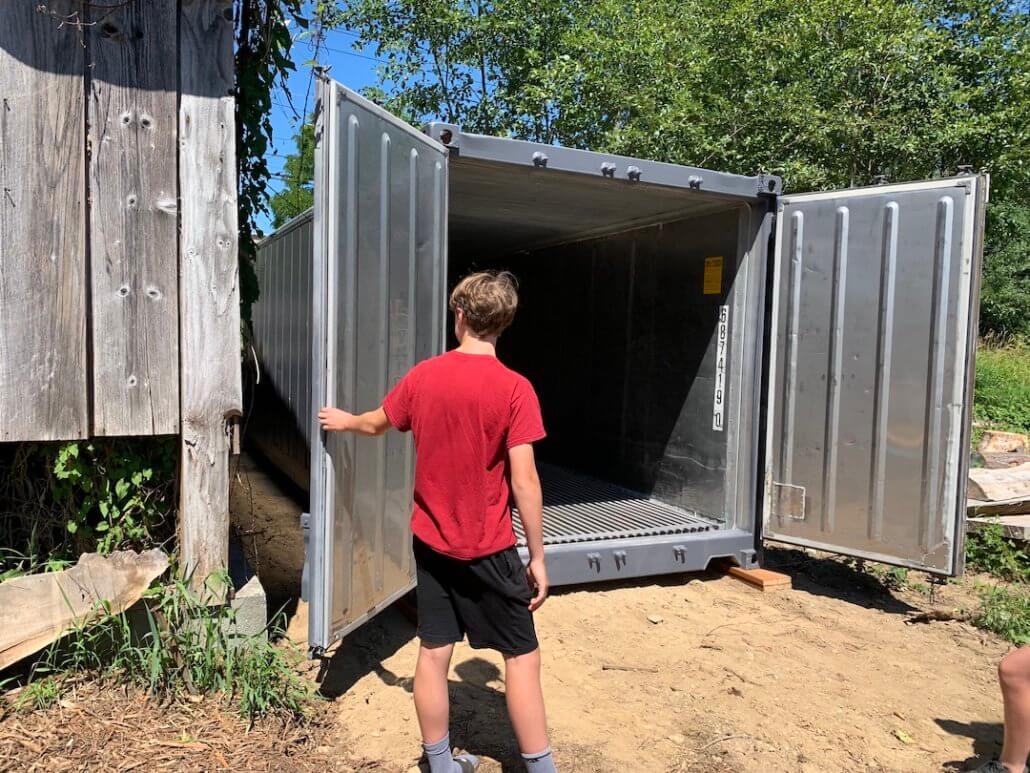 The big gray box is actually a decommissioned refrigerated container, which means it is insulated unlike most containers. After having traveled all over the world, it is now being given new life as VNC’s science adventure lab. This purchase was made possible by a generous donation to Vashon Nature Center from Jamie Hatten, former school teacher, strong supporter of science education and avid fly fisher woman!

VNC will  use the container as a central place to store our field equipment from microscopes to sample bottles to nets and water sampling equipment to waders, rubber boots, wetsuits, survey equipment, a refrigerator for sample storage, as well as plaster casts of wildlife tracks and other hands-on science education equipment.

The interview went about twelve minutes and aired really, really early Sunday, July 21st. Doubtful you’ll learn anything new, but here’s the link just in case you want to give it a listen.

Gemma Alexander did a wonderful writeup of the recent SDC show at VCA.  Find it here.

I grew up (a strange turn of phrase) in Rochester, New York, and it is there I spent much of this past week. At times, the memories and old stories flowed like summer rain. Visits to a beloved farm market for the first corn of the summer, my first-grade school, an early family home, a hill down which I used to careen on my two-wheeler, the YMCA where I played for my first basketball team . . . none as big as they were all those decades ago, but all triggering in their own sweet ways.

Two names towered over the local music scene during my growing-up years.  Actually two pairs of names: Chuck and Gap Mangione, and Bat McGrath & Don Potter. An outstanding composer and jazz man, Chuck just blew up the crossover-jazz scene with “Feels So Good.”

Here are two of his compositions you may not know. Bellavia, recorded with saxophonist Gerry Niewood won Mangione his first Grammy.

Chase the Clouds Awaywas used at the 1976 Summer Olympics in Montreal, Quebec.

Gap Mangione never achieved the commercial success of his brother but was and is no less loved in the Rochester music scene. His album of note was Diana in the Autumn Wind.

Taking a slight detour, I first heard Esther Satterfield sing at a concert with Chuck and the Rochester Philharmonic Orchestra (RPO).  Then, and every time since, her “Look to the Children” gives me chills and makes me reach for something to wipe my eyes.

Bat McGrath is gone, and Don Potter has since moved on to work in line with his deep faith. Lots of people have taken on Over the Rainbow. I think his version ranks as one of the best.

The Friday Fish Wrap is edited, and mostly written, by Kevin Hoffberg. Why “Fish Wrap”? Years ago, living in San Francisco, I became a devotee of a legendary journalists named Herb Caen. While he may not have been the first to use the phrase in connection with “yesterday’s news,” he is the one I remember. Today’s news is tomorrow’s fish wrap. Maybe it’s a generational thing. At any rate, we call our Friday wrap up, The Friday Fish Wrap . . . Five things worth knowing about VCA this Friday.